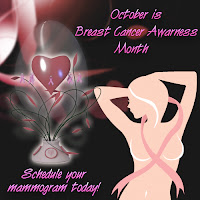 During the entire month of October, I've opened a contest to celebrate Breast Cancer Awareness Month. For a donation to any breast cancer research of your choosing, you'll be entered to win a copy of two upcoming books. Badland Warriors: Marines (with the fabulous Shara Azod) and Memphis Heat 1: Stakeout (with the equally fabulous Shelby Morgen.) Click the image above to find out the details and for more information about each book offered.

In addition, if you have your mammogram at Kentucky Breast Care, let the receptionist know when you arrive that you found KBC through Marteeka's website for a free book of your choice.
at 16:04 No comments:

Be looking for fun things in the coming days! And if you are over 35 years of age and haven't had your TATAs smashed... make an appointment now!!!
at 16:53 1 comment:

Writing "Short" with a Partner

One of the hardest things to do in writing is to get two writers together, come up with a complete story, and still have it be under ten thousand words. I've started out with an outline that is supposed to be fifteen thousand end up being thirty-four thousand words. True story.

With a writing partner, you can watch each other's flowery descriptions and, in general, see how many times you can piss each other off before you call it a night. Shara Azod and I do this all the time. She has trouble with back story, I have trouble with keeping my facts straight. We've come close to wringing each other's necks on more than one occasion, but we always manage to come up with a good story. Just takes a while sometimes.

When writing with a partner, I suggest Google Docs. You can see each other in real time, the person writing can just write and not worry about typos, and you can see when one of you gets stuck. It also has a chat option so you can brainstorm while you're writing. I often tease Shara that we need to compile our chats because they are almost as interesting as the books we write.

One very important thing to consider, the absolute most critical part, is to find a partner you mesh with. One of you will always be the dominant, or lead the story, but you should have similar interests and writing styles or you'll end up killing each other before the first book is finished. When Shara and I get on a roll, we can turn out an eight to ten thousand word book in a single day. If you find a partner you enjoy writing with, you'll find you feed off each other. Each paragraph, each chapter, will come easier and easier. 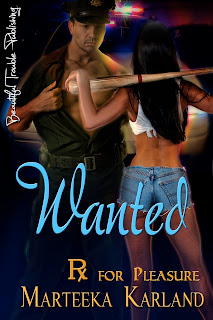 Book 5 in the Rx for Pleasure series.

From the moment Brett first saw Gretta wielding a Louisville Slugger to defend her sister, he knew he wanted her. No. It was more than that. He needed her with an intensity that would make the gods blush. His focus from that moment forward became finding a way to make her his.

Gretta was just driving down the street, minding her own business, when she was pulled over for speeding. If that wasn't bad enough, the annoying officer had the nerve to arrest her for terroristic threatening. Son of a bitch! Could this night get any worse? If by "worse" one means a sexy cop dressed in sin who kidnaps her and tortures her with things...better left unmentioned...

Yes. Things just got much worse.