From Kate Steele -- Whenever I'd go to various festivals in the area where I live, I'd search for pumpkin fudge until I decided to make my own. Guaranteed yummy! 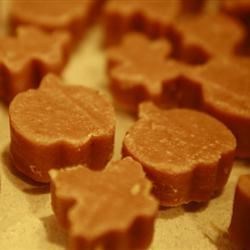 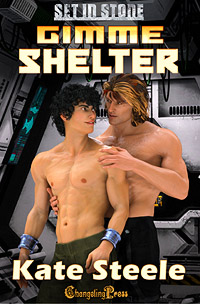 Remembered terror and unparalleled pain made him tremble. His breaths became short and fast. The sensation of being trapped assailed him and Shanrem stumbled to the door and rushed through. He stopped short at the sight of the doctor, now accompanied by a male with familiar golden eyes. Shanrem’s knees chose that moment to fold, but his descent to the floor was halted by a strong and steady grip.

“Easy there. Let’s get you back to your bed. Do you remember me, Shanrem?”

Shanrem muttered a soft thank you and gladly accepted the support. “Yes. Your name is Zen.”

Warmth emanated from where Zen touched his arm. Shanrem took a shuddery breath and tried to relax. It was easier than he’d anticipated. Zen’s presence and the subtle male musk of his scent stole through Shanrem. For reasons unknown it calmed him, easing the sensations of panic. Upon reaching the bed, Shanrem gratefully sat and watched as his rescuer took a seat on the bed opposite his. Zen studied him with such intensity, it made Shanrem glad he wore the soft, loose pants in which he’d been dressed. Though the perusal was penetrating, still Shanrem felt no threat, not as he had every day he’d been among the Dukati.

As Doc fussed a bit taking readings with a bioscanner, Shanrem let his gaze roam over the man who’d spoken to him when he’d first awakened. Tall, but not quite as tall as Doc, what Zen lacked in height he made up for in bulk. The clothes he wore were not revealing, but they hugged his frame just enough to hint at the hard body and sleek muscles beneath them.

His face was a near perfect oval, with a slight squaring at the jaw line. His eyes, under even brows, were somewhat heavy-lidded, giving him a slumberous, sensual air. A strong nose, straight and wider than Shanrem’s, led his gaze to rest on a pair of lips that were full enough to tempt, but not so much as to seem pouty. They complemented his face, as did the spare stubble that dotted his chin, jaw and upper lip.

Zen’s skin was a medium mocha brown. What flesh was revealed by his face, the open V’d-neckline and short sleeves of his shirt, shone with a healthy luster. Under the surface in various places were a few faint and colorful markings, near invisible patterns that wandered and flowed. The opened neckline of his shirt also bared the beginnings of a silky-looking matt of hair that triggered an unexpected flutter in Shanrem’s belly and made his fingers twitch.

During the course of his studies, Shanrem had come across a picture of a man from Earth whose abdomen was adorned with hair that began at his collarbone and trailed down to and below the low-riding waistband of the pants he’d been wearing. Males on Shanrem’s planet had very little in the way of body hair other than some light furring around their genitals, so it had been an unexpected and arousing sight. One that he had used many times to fuel the fantasies he’d indulged in while bringing himself pleasure.

To see something similar now, in person, even under these circumstances, stirred those memories and he felt a flush heat his skin. Shanrem wasn’t sure if he should be shocked or grateful he was still capable of sexual excitement. The Dukati male who’d taken him as a pet had had no interest in giving Shanrem pleasure. Shanrem was there to be used and was made aware of it every time he’d been violated.

Shanrem forced his gaze from that intriguing chest to the hair on Zen’s head. Long enough to brush the collar of his shirt, varying shades of black, crimson, chestnut, chocolate and tawny gold blended into fine, pleasing patterns among its shining waves. Shanrem had seen little of the way his rescuer moved, but even that small amount had left an impression. He was quick when needed, self-assured and possessed an easy grace like that of animal. That thought brought a realization to Shanrem which explained Zen’s coloring.

“What race are you?” Shanrem asked.

As though expecting the question, Zen answered without hesitation, “Half Human, half Tulensian.”

The warmth in Zen’s eyes winked out and was replaced by an impenetrable calm that hid his every emotion. 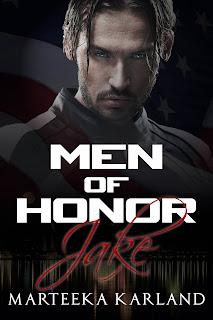 Linda ducked her head, not ready for him to see her expression. He'd know how much he affected her. If he didn't already. But he might also see straight through her and know she planned on skipping out to save her sister without him or the team.
With a sigh, she turned away from him. "Just give me a minute."
"For what?" His hand settled gently on her shoulder. She hadn't even heard him move. "For you to pull away from me? Please don't, Linda. Give us a chance."
Slowly, he urged her around to face him. Linda took a deep breath, trying to get herself under control enough to go along with him. She just needed to hold herself together for a little while longer.
"You can trust me," he said. "I'm not going to break your heart."
With a raised eyebrow, Linda replied, "Maybe I'll break yours."
Jake grinned. "I'm willing to risk it."
Linda went into his arms willingly. If she only had this night, she'd take it until it was time to leave. Then his lips found hers and she gave herself up to the pleasure he so effortlessly created within her.
Where the first time had been frenzied and desperate, this time the pace Jake set was slow and gentle, but no less passionate. Before, Linda had felt the need to battle Jake for dominance. Now, all she wanted to was to let him drive. She willingly followed his slow, measured kisses and caresses.
Hands on her hips, Jake held her against him, his cock beginning to pulse against her belly with each lazy thrust of his tongue. Before she realized what she was doing, her arms slid around his neck. Her fingers tangled his hair as she kissed him back, reveling in the textures of his lips, tongue, and skin. Had she ever been so inundated with sensation? Had sex ever been this all consuming?
Unable to focus on anything other than the feel of Jake's magnificent body wrapped around hers, Linda surrendered. Completely. Strong arms lifted her, carrying her back to the bed. She sighed in contentment to feel his weight coming down on her. When she left him, this might be all she had to sustain her. Because she knew in her heart Jake would never trust her again. So she'd cling to the memories they were making, knowing she'd never find another man who completed her the way Jake did.
Urging her legs around his hips, Jake lifted her. The next thing she knew, Linda was on the bed with Jake following her down, his big body pressing her into the mattress. He urged her leg over his hip and she dug her heel into his buttock. Strong arms locked around her, Jake kissed her neck gently as he rocked against her. His hard body seemed to imprint itself on hers as they moved against each other. The moment was laden with something she couldn't name. Didn't want to name. It would only make leaving that much harder.
His kissed his way to the swell of her breast lingering there a moment before finding a nipple and swirling his tongue around it. The pleasure was lazy and contented, like they'd done this a thousand times before. She arched to his mouth, soaking up the sensations like a greedy sponge.
When he left her breast, Linda protested, trying to tugg him back. Instead, he reached for the night stand, snagging a condom. Taking the little packet between his teeth, he ripped it open then sheathed himself before covering her fully again.
His gaze seemed to snare Linda's. She couldn't look away from him no matter how hard she tried. "Don't run away from me, baby," he whispered as he took her mouth again. "Don't run. Stay with me."
God, she wanted to! His big, warm body filled her with so much more than just his cock. He seemed be twining himself around her soul as well as her body.
With one easy thrust, Jake slid into her. The sensation was divine A little slice of heaven. His movements were languid. He was making love to her.
All at once the emotion welling up inside her was nearly overwhelming. Tears burned her eyes and stung her throat.
"What are you doing to me?" Her whispered question was almost a plea. For what? To stop? To never stop? 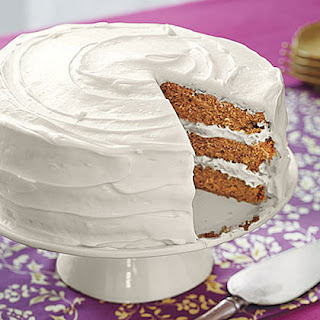 How to Make It

Make cake: Sift together flour, baking powder, baking soda, salt and spices. In a large bowl, using an electric mixer on medium speed, cream butter and brown sugar until fluffy. Beat in eggs one at a time. Stir together milk and sour cream. Beat half of flour mixture into butter mixture until just combined, then stir in sour cream mixture. Stir in remaining flour mixture until just combined; do not overmix. Divide batter among pans and bake until a toothpick inserted in center of a cake comes out clean, about 25 minutes. Cool pans on wire racks for 10 minutes, then turn cakes out and cool completely.

Make frosting: Beat cream cheese and butter until fluffy. Slowly add confectioners' sugar, beating until well combined and smooth. Beat in vanilla. If frosting is too soft, set it in refrigerator for 15 to 20 minutes to firm up, then beat it again before icing cake.