Black Reign is coming along... check out this Sneaky Peek of Fury 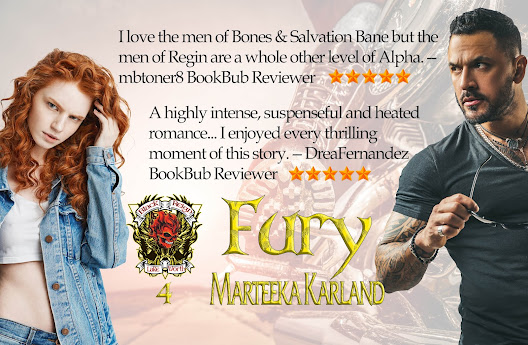 “Wow,” she said. I got the feeling that, had she not been so exhausted both mentally and physically, she’d be more impressed with her surroundings. “This place is amazing.”

I shrugged. “It’s home.” She nodded then stood there, fidgeting. “You need help?”

“OK. I’ll leave it to you then. Do not lock that door. If you need help, I’d like to be able to get to you without breaking down my door.”

I didn’t move. She glanced up at me, then turned her back and stripped off her T-shirt before tugging at the pins holding her hair up in those impossibly tight braids. I sighed, knowing it was a horrible idea, but also knowing I was doing it anyway.

She took a deep breath and let it out slowly, her shoulders slumping and hunching in on herself. “I can do it myself.”

“Lots of things hurt,” she said absently. Her body shivered, but it wasn’t from the cold. She was barely holding herself together.

I pulled the pins gently from her hair, and the ties at the end. Then picked out the braids with my fingers. Once I was done, I let my hands fall to her hips. She didn’t move away. Instead, she leaned back against me slightly. For some reason, my stupid hands slid around her waist to cross under her breasts, and I rested my chin on her head.

She shrugged, but nodded. Taking another deep breath, she turned in my arms. “Will you help me with my sports bra? I’m not sure I can do it with my ribs this sore.”

I swallowed, looking down at her. Those impossibly blue eyes looked up at me with such a combination of hunger, need, and pleading, I didn’t know what to do. “I’m not sure that’s a good idea.”

“Please, Fury,” she said, one tear sliding down her cheek. “Just this once. I’ll never ask you for anything again.”

“You’re not in the right state of mind, Noelle. I’m not taking advantage of you. Let’s just get you a hot shower and to bed. If this is still what you want, we can talk about it in the morning.”

She turned around, nodding forlornly. God, she was breaking my heart. Gingerly, she tried to pull her bra over her head. Her side was red and turning purple where the bruise was. I knew it had to hurt. With a sigh, I helped her get it the rest of the way off. When she went to drop her shorts, I stayed her hands.

“Leave them,” I said gruffly and gently urged her into the shower. When she would have turned, I stepped in behind her and grabbed her shoulders. Last thing I needed was to see her tits. Not now. Hell, not at all! I’d tried my best over the past year to not view her as a desirable woman and only see the fighter. But I’d had my fantasies. Noelle was at least fifteen years my junior, but she called to me in ways I didn’t want to think about. Cause I could easily imagine having the nastiest, raunchiest sex I’d ever had with anyone with Noelle. She was strong, her body honed in battle. Just like mine. Noelle was a woman who could take anything I needed to give her and come back for more.

In the shower, she just stood there, the water cascading over us in a gentle fall. My boxer briefs were soaked and did nothing to hide my raging hard on. Noelle didn’t say anything. I just stood there with my hands on her shoulders.

“Come one, Brawler. Wash yourself. I’m here in case you get dizzy. Don’t want you to fall.”

Finally, she reached for the shower gel, then squirted a generous amount on her hand. Slowly, she washed herself, being careful when she touched a particularly sore spot. She leaned her head forward and let the thick fall of water wet her hair before she brushed it back with her arm and reached for the shampoo. She lathered then conditioned it before giving her hair a final rinse. Just the simple act of taking a shower had her whimpering when she used a bruised muscle. I wanted to help her, but knew if I had to touch her that much, I’d not stop there. Not with us like this.

I reached around her and turned off the water, snagging a towel I’d hung over the glass enclosure so it was within easy reach. Wrapping it around her body, I guided her out of the shower and snagged another towel.

“Wrap your hair up, and I’ll brush it out and dry it for you.”

She looked up at me. “Do you even know how to do that?”

“It’s a fuckin’ brush. How fuckin’ hard could it be?” I was being mean, I knew. Noelle didn’t seem to mind. In fact, she smiled.

“I like the grouchy side of you better.” Then a tear tracked down one cheek before she dashed it away. “Not sure I can take much more of the kind and caring side.”

“Yeah. But it’s not your default setting.” She ducked her head. “Not something I’ve seen a lot of.”

She was right, I knew. And it had been on purpose. I didn’t want to get to know her. Didn’t want her to get to know me. I would have pawned her off on someone else if she hadn’t had all the talent she did. But she was just too good for me to pass up. Noelle had a real shot at making it to the big fights. If word got out about this fight, I doubted any manager in the big leagues would touch her.

“You never needed it before,” I admitted.

What better way to start the holidays!

Actress Carrie Murray’s films are a Christmas lover’s delight. Filled with twinkling lights, festive carols, and happy endings, they’re the perfect escape from reality—for her and the audience. Then Tinseltown calls.

Braxton Timothy is Hollywood’s biggest action star. Handsome and talented but decidedly on the naughty list, no one can fathom his sudden desire to produce a feel-good Christmas movie—least of all, his no-name co-star.

Alternating between scenes reminiscent of everyone’s favorite made-for-TV movies and unexpected, off-screen chemistry, Gingerbread Falls has surprises in store this holiday season. The question is, will there be enough Christmas magic to convince two imperfect people that they’re perfect for each other?

Katie Mettner writes small-town romantic tales filled with epic love stories and happily-ever-afters. She proudly wears the title of, ‘the only person to lose her leg after falling down the bunny hill,’ and loves decorating her prosthetic with the latest fashion trends. She lives in Northern Wisconsin with her own happily-ever-after and three mini-mes. Katie has a massive addiction to coffee and Twitter, and a lessening aversion to Pinterest — now that she’s quit trying to make the things she pins.