A Hero to Master Me Zaraiah Nelson is in a bad place. Has been since she spent time in hell. No one knows her secret, but it eats at her every day. Burns her soul at night. Even those closest to her don’t understand the needs that drive her, the need for action. The need to punish herself for her fatal failure. No one, that is, until Mike Carver

Mike recognizes Zaraiah the moment he meets her but can’t place where. He knows she has issues, that something isn’t quite what it seems with the dark-skinned beauty, but she refuses to tell him willingly. What she doesn’t understand is that he’s Force Recon. Gathering information is what he does. No mission has ever been this important, and Mike has only ever failed one mission. That one time in his life will prove to be the key to Zaraiah. If only he can put all the pieces together…

“Fuck that,” Mike muttered as he shoved the man out of the way. Desperation clawed at him. He had to get to her, get her to safety. Again, one of the bouncers tried to detain him. Again, he shoved the guy out of the way, but the first guy now grabbed his arm. Jerking away, Mike powered his way through the crowd to Zaraiah.

“I said stop!” The first bouncer now had Mike by the arm, jerking him backward. The second one snagged his other arm, both pulling him away from Zaraiah. With a snarl, Mike let go all pretense at playing nice.

A quick jab to the ribs to one man, a punch to the face for the other, and Mike ran headlong to Zaraiah. People were standing around her now. Some laughing. Some looking concerned. Others muttered, “crack whore,” as they turned away. Only Mike knew the truth. The continuing “pops” put her in the grip of a panic unlike any of those bastards had ever known.

“Move!” he shouted over the din, reaching Zaraiah just she made eye contact with him.

“Help…me…” Then her eyes rolled back and she passed out.

It was all Mike could do not to bellow in rage. Instead, he scooped her up and headed out of the club. When one of the bouncers he’d confronted moments before stood in his way, whatever he saw in Mike’s face had him raising his hands and backing away. Pussy-ass motherfuckers should be protecting Zaraiah instead of letting Mike waltz right out of there with her, but no one lifted a finger to help. Funny how that worked. He knew he couldn’t have it both ways, but damn if it didn’t focus all his anger and fear in a different direction than the horrible worry over Zaraiah. Without that shift in focus, he’d lose his goddamned mind.

UNEDITED EXCERPT...A Hero to Master Me 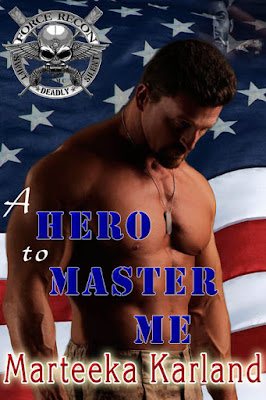 UNEDITED EXCERPT!
A Hero to Master Me
by Marteeka Karland