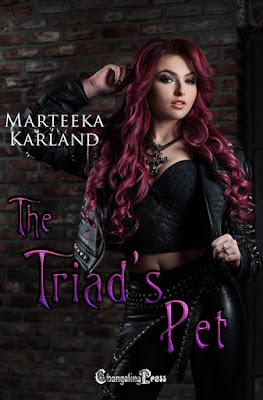 A feisty outcast...Arryn's life has always been awkward. The daughter of a traitor and his pet, the only reason she is allowed to continue to live in the village is because of her exceptional talents in both healing and engineering. Even still, she knows how to pick her battles and lives a contented life.A triad pledged to another...Being taken as a pet is one thing, but to be taken by a trio of men who have pledged to be the promised of another woman is intolerable. Perhaps the impression Arryn made when she saved Storm's life was a strong one, but she certainly didn't sign up to be a pet. Dealing with her budding feelings for the three warriors is hard enough, but knowing she can never have them is enough to break her heart. Not that she'd ever let it show.A village under siege...When danger is deliberately brought into their midst, it's up to Arryn to direct her men. But how can a pet convince three stubborn warriors to trust in her unique abilities?