The Fabulous Four have done it again! 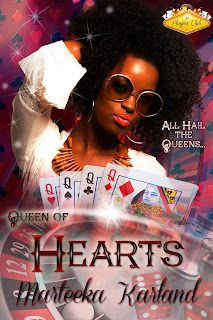 The Player's Club: Queen of Hearts

Emmaline was in trouble. Real trouble. For an hour, she'd been fighting the urge to touch herself. She'd tried counting sheep. They'd turned into images of Graven charging like a beast to reach her, tackling her to the ground in a naked heap to make wild, passionate love to her. She'd tried meditating, letting her mind go blank while she drifted on a calm sea. It had turned into Graven gliding through the water to reach her, wrapping his body around hers while he kissed her until she was as boneless as the water. It was no use. Without something to demand her full and absolute concentration, her mind was going to keep coming back to sex. With Graven.
Knowing there was no way to stop this, she let her hand slide back down her naked body to her mound. She was even more swollen and wet than before. It was as if her confrontation with Graven had heightened her arousal that much more. Her clit throbbed and ached with need, the little bud swollen and distended.
Her leg spasmed, knotted. She froze, trying not to cry out in pain because that would certainly bring Graven. Shifting positions, she tried the other arm. This time, her shoulder cramped, and she was unable to bite back a whimper.
"Emmaline?" He opened the door, his large frame seeming to fill up the space. He crossed the short distance and sat on the edge of the bed beside her.
"I--I need to…" what? I need to fuck you, Graven? Yeah, she'd just blurt that out. "Exercise. Can you help me to the pool?"
"No. Tell me --"
"No!" She took a deep breath. "I can't tell you, Graven. I just need to do something to get control."
"Look at me, Emmaline." His tone brooked no argument. "I'm not judging you, OK? I know a little about OCD, and I know that you can't always get the control you need to handle a given situation. You're at that point, and your body isn't cooperating."
Emmaline knew she looked at him a little helplessly. "It's humiliating," she finally whispered, looking away.
He didn't let her retreat, gently turning her face back to him. With a muttered curse, he switched on the light and stood. Legs slightly apart, he stood before her. There was no mistaking the bulge in his pants. Graven was erect. And blessed in size.
"You want to see humiliating? I've been like this ever since I first laid eyes on you." He gestured to his crotch. "I've got a good idea you're in the same way I am, and that's why you're fixating on the running. You're trying to reset your brain. Exhaust yourself to the point you can't even think about sex." He crossed his arms over his chest. "If I'm wrong, I'll gladly take you to the pool and help you work out so you don't drown yourself, but I know I'm not wrong."
She had no idea what to say to him. She was, after all, the worst liar in the world. "Say you're right," she capitulated. "What do you propose we do about this? I can't sleep with you in this condition. It would be for all the wrong reasons and would be insulting to us both."
"That's why I've been trying to get you to open up to me, Emmaline. I'm not a man to take advantage of a woman, and I can take care of myself. If you weren't injured, you could take care of yourself, too. Just tell me what you need, and I'll help. I'm betting, if this is something that happens often, you've got more than one toy to take the edge off."
For all his blunt talk, he didn't look put out or like he was laughing at her. He looked like he genuinely wanted to make it so she could fix this problem on her own.
With a vexed sigh, she closed her eyes. "This is embarrassing."
"I know. Believe me. At least you're not standing at attention for all the fucking world to see." His tone was wry, but he grinned at her. If he could be cool about this and not make a big deal of it, she could too. Besides, he had a point. Err… so to speak.

A woman determined to save her family…
Esperanza’s life is so fucked up even she can’t tell where she’s going. The only thing she knows for certain is she is tired of running. Tired of looking over her shoulder. Tired of the nightmares of a past she wants to forget.

A man who will never let his family go…
Gunnar’s life has always been about keeping his family safe. In reality, he’s terrified for himself if something happens to them. In their lives, Gunnar is father, big brother, mentor, and protector all rolled into one. His brothers – his team – are firmly under his control. Always have been. Then along comes Esperanza, and his control is shattered. He can’t simply order her around, nor can he always keep her safe. She has a mind of her own and she’s not afraid to use it.

What happens when both are threatened?


Betrayal leaves a bitter aftertaste, and Gunnar isn’t about to let Esperanza run this op alone. In fact, until he finds out who put a bounty on her head, he’s not letting her anywhere near Mexico or the Cartel. The only way he thinks to accomplish this distraction is sex. But that’s a dangerous game. Where there is pleasure, the heart is even more involved, and Gunnar is rapidly falling for the feisty little Hispanic cartel princess. 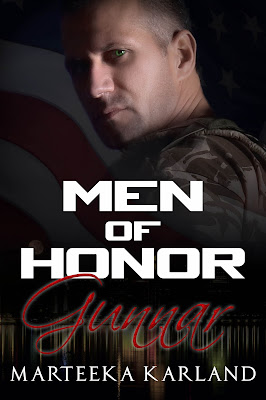 Gunnar lunged closer to her so their faces were inches apart. “Diego will die. Your grandfather may, as well, if he hasn’t already. As much as you think de la Huerta loves you, I promise he will always put his own interests above yours. The sooner you realize that, the better off you’ll be.”
“You don’t know anything about him! He was good to me!”
“I’m sure he was. The question is, does he know you’re the one who brought the ATF down on his cartel? When she didn’t respond, Gunnar continued. “Are you sure it was Diego who put that bounty on you? Really sure?”
Gunnar hated the worry on her lovely face, but she was behaving and, worse, planning like an amateur. Above anything else, he had to keep her safe. If that meant he put some much-needed chinks in her ego, so be it.
“I’m willing to risk it,” she finally said, her chin going up stubbornly.
With a growl, he gripped the back of her neck with his free hand. “I’m not.”
Then he crushed his mouth to hers.
Esperanza was so shocked she gasped. When she did, Gunnar swept his tongue inside her mouth, taking full advantage. Because she wasn’t prepared, his effect on her was like a lightning strike. She had no defenses against it.
His strength was its own aphrodisiac. He handled her as easily as he would a child. She was sitting, straddling his arm, her weight resting completely on him. His grip on the bar alone held her in place, and he did it with seemingly little effort.
Threading his hands through her hair, Gunnar took a firm grip, moving her head where he wanted for her to receive his kiss. Esperanza was lost. Couldn’t have pushed him away if she’d tried. Not because he was so strong, though there was no way she could have broken his grip. Esperanza was overwhelmed by the sheer magnetism of Gunnar Carver, with the spell he’d cast over her.
She was helpless because she wanted him so much, had since the first moment she’d met him when she’d hit him with a lamp with all her might. She’d brought him to his knees, but hadn’t put him out. She’d followed through with a kick to his groin, but he’d had enough presence of mind to catch her foot and toss her on her ass. He hadn’t retaliated, only lunged for her, pinning her to the floor with his big body. It hadn’t lasted long—Esperanza had freed herself—but in those few seconds, she’d been surrounded by his heat and strength. She’d known what it would feel like to have this man on top of her, readying to take her body with his. She’d seized on it, filling her head with all kinds of sex acts. Every single one of them revolving around this man.
That sinful kiss went on and on, Gunnar thrusting his tongue in and out of her mouth in sensual licks. He drove her mad with wanting him, with needing the pleasure he was merely hinting at. The heat of his body surrounded her, fueling her lust, taking her to unimaginable heights. And still he kissed her…
Esperanza found herself rocking her hips with each thrust of his tongue into her mouth. Her fingers clenched the front of his shirt as she hung on for dear life. She knew she needed to fight this, to regain control, but there didn’t seem to be a way back to sanity. All she could process was Gunnar’s intoxicating scent. The sensual feel of his hair-roughened chest where she fisted his shirt at the open V. The addictive taste of his kisses. The explosive orgasm she was going to take from him if she didn’t stop sliding her crotch over his arm…
Without warning, his grip seemed to slip, letting her drop a few inches. Good. He’d end this now.
Only he didn’t. Instead, the lower position of his hand on the iron bar raised his arm to the perfect position for her insistent rubbing to better hit her clit. The second she realized what he’d done, Esperanza whimpered, whipping her hips in a frenzy as each one shot fire straight to her clit.
“So, you’re going to come,” he rasped out in a rough voice. “When you do, make it loud. Scream my name.”