Hump Day... A Dad for Sebastian

They say love strikes when you least expect it. It’s certainly true for Ares Grayson and Honey Love.
Honey knows there are no knights in shining armor. As a single mom walking a bumpy road alone, the light in her life is her son, Sebastian. Her world revolves around him, and she’s determined to give him the opportunities she had, but threw away when she took a gamble with her heart.
Ares has more than enough to give any woman in his life, but there’s only one woman he’s interested in. When he sees her for the first time in seven years, he realizes just how much he needs to protect her…and the special package she brings with her.
The past and present collide in a hurricane of emotions and memories. As Honey and Ares unravel the wreckage of the past, a new storm rolls in. Apollo. Ares’s brother…and Sebastian’s father.

Ares stood from where he’d been sitting in a darkened corner of the hall just inside the stairwell. He had a good view of Honey’s door and was still in the shadows. Which wasn’t saying much. Most of the safety lights were out.

Well. Ares was about to give someone a reason to not be in this particular hall harassing this particular woman. As the lanky bastard in a dirty wife beater sporting wood through his thin pants knocked at Honey’s door, Ares crept closer. He was about to pull the guy into the shadows and make him piss himself when he heard Honey’s resigned voice.

The conversation didn’t last long, but it was enough for Ares to see red. The fucker was hitting her up for money, padding the rent. It didn’t take a genius to figure out what he was working toward. It stopped tonight. When Honey closed the door and had every lock clicked into place, Ares pounced.

Her landlord turned around, a sickening smile curling his lips, and ran straight into Ares. Literally. The man’s nose hit Ares’s chest hard enough to cause him to tear up. “Awfully late to be shaking down tenants for money, don’t you think?”

The little man -- Mr. Hooper, he’d heard Honey call him -- backed up a step before standing his ground. “Her rent is due today. If I don’t come to collect when I know she’s home, she won’t pay. I’ve had trouble with her in the past.”

“You didn’t argue when she told you she’d never been late in the three years she’s lived here. Are you saying she was lying and you didn’t call her out?”

“They all lie. What’s the use arguing? Besides, she didn’t pay me everything, even with me tracking her down at this ungodly hour. If she’s not careful, I’ll get social services involved. Any mother who would keep her child up this late doesn’t deserve to have him.”

Ares only thought he’d been angry before. With a growl, his hand shot to the other man’s throat. Ares spun them around so that Hooper landed on the opposite wall from Honey’s apartment. “This is the last time you come here when it’s not daylight. If I see you anywhere near this woman when it’s not full sun out, I will gut you like a fish.” Ares was in the man’s face, his hand clamped like a vise around his throat. “Take the money you have and go. Do not come back for more. Is there anything about what I’ve just said you don’t understand?”

When the man shook his head, Ares released him. “Go.” Ares didn’t have to tell him twice.

The locks to Honey’s apartment clicked open slowly, as if she were trying to open the door without anyone noticing. Ares stepped back to put his large frame in front of the door while Hooper beat feet down the hall, just in case he decided he might try to take Ares on to get to Honey. Unlikely though it was. “What are you doing?” she hissed, finally undoing the last chain and opening the door for him.

Ares didn’t take time to protest her unlocking the only defense she had against people like her landlord. He shouldered his way inside and locked the doors soundly again. “I decided to watch over you tonight,” he whispered, aware that Sebastian was in the same room and not wanting to disturb the child more than he already had been. “Is Sebastian still asleep?”

Honey looked over her shoulder. The light spilling in through the kitchen window from the street lamps bathed her face in a golden glow. “I think so. He’s usually a pretty sound sleeper.”

“Good. Go to bed. I’ll stay by the door in case you have any more late-night visitors.”

“I know,” she said. Ares was sure her voice broke. Before she could turn away from him back to the sleeper sofa, he snagged her arm gently and pulled her to him. The light on her face now illuminated the tears drying there. Ares felt like he’d been gutted.

With a groan, he pulled her into his arms, palming her head with his hand to hold her against his chest. “God, baby. Please don’t cry.” As if his broken plea were her permission, Honey let out a little cry against his shirt. Her hands bunched in his shirt and fisted there as she used the material to muffle the sounds as that one cry turned into body-racking sobs. Ares could do nothing but hold her to him. Resting his chin on her head, he squeezed her to him tightly.

When she showed no signs of stopping any time soon, he scooped her up and slid down the wall to sit with her across his lap. It was clear her heart was breaking. Whether from the past or what she saw as an uncertain future, Ares didn’t know. He just knew he wanted to kill his brother for hurting her. True, Apollo had been just as young as Honey, but he’d had seven years to realize his mistake and make up for it. Instead, the little punk had run as far from Greenville, Kentucky as he possibly could.

As her tears continued, Ares vowed he’d make this right, no matter what it took. Finally, when he could stand no more, he brushed the tears from her face and encouraged her to look up at him. “Shh, baby. Shh. Nothing bad is going to happen to you and Sebastian ever again. I swear on my life.”

“Apollo swore to me he loved me.” She sniffed. “Why should I believe you when your own brother lied to me?”

He swore softly. “Tell me what he did to you, Honey. I need to know.” So he’d know exactly what he was beating Apollo’s ass for. 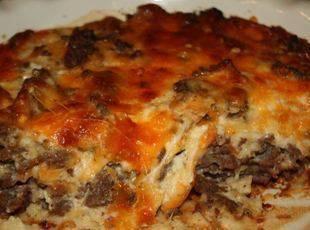 1. Heat oven to 400°F.
2. Spray a 9 inch pie plate with non-stick cooking spray
3. Cook beef and chopped onion in a skillet over medium about 10 minutes or until beef is brown. Drain excess fat.
4. Stir in salt, garlic powder and Worcestershire sauce and then spread in pie plate. Sprinkle cheese on top of meat.
5. In a small bowl, whisk together the milk, eggs and Bisquick. Make sure you try to get as many lumps out as you can. Pour over meat mixture.
6. Bake in oven for 25 minutes or until a knife comes out clean
at 02:30 No comments: