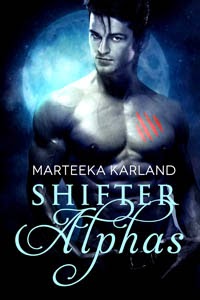 Yeah, I've been neglecting my blog this month. As a result, I missed posting my newest releases. :)

SHIFTER ALPHAS
The men of the wolf shifters are all strong, but only a few are Alpha. Wade, Simon, and Julian are such men, shifters of power as well as dominance. In this world of magic and mythical beings, they must protect their women as well as their pack.

Unfortunately for them, their women are just as powerful as well as determined to keep their men safe. With a rogue Dark Witch on the loose the Alphas must figure out a way to safeguard the pack and destroy the evil bent on the destruction of one shifter clan and taking control of the other.

These are the Alphas. And they inspire fear in all who know them. 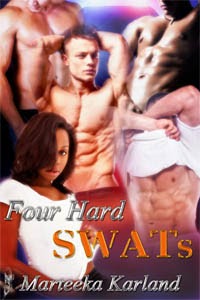 FOUR HARD SWATs
Tawni only wanted to prove herself. As sniper to her SWAT team, she was finally on the path she’d always needed to find. Until a raid gone wrong ends her in the hospital.

Nicholas, Grayson, Wyatt and Sebastian make up the rest of her team. What she doesn’t know, what they have no idea how to tell her, is that they have every intention of proving to her why she belongs with them. Not only as a member of their team, but in their lives.

Unfortunately, Tawni has a tendency to gravitate to the wrong kind of men, dominant men who would rather hurt her than seduce her. Until she can put that part of her past aside, she can’t give herself fully to them.

But Tawni has never faced a man so intent on what he wants as these four men. Soon, she’ll come to realize she longs to take everything her four hard SWATs have to offer.