This week's Snog comes from Memphis Heat: Streetwise by me and Shelby Morgen. This book will be available THIS WEEK from Changeling Press! WOO HOO!! 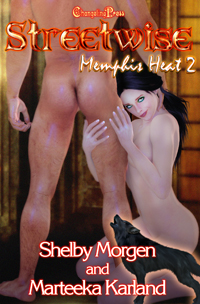 The towel was damp, and it smelled like her. Wasn’t the first time he’d noticed her scent, sweet and pungent, like fresh flowers. He buried his face in the towel and pulled in a deep breath. He’d noticed, but not like this. Not like his whole body was alive with the smell. His cock rose to full attention, and he realized belatedly he was standing there naked. Not that he cared all that much. A lot of things that used to matter didn’t seem so important now. “Damn, you smell good.”
“Good thing one of us does. You smell like wet, muddy dog.”

Butch wrapped the towel around his waist and headed for the bathroom. He stopped in the doorway. “Where’d you find those sweats? I’m going to need something to put on after… “

Regan’s expression had gone feral. Lord, he’d had no idea the woman could strip that fast. And how the hell had she managed to get that close without him hearing her move? “We’ll worry about clothes later.”

“Yeah?” He swallowed hard. “You sure about that?”

She shoved at his shoulders, as if to knock him backwards out of the doorway. “Anyone ever told you you have a gorgeous body, Butch?”

“Yeah, in the showers at Camp Pendelton, right before I broke his face.”

Regan’s laugh was low and sexy. “Well, I’m not a guy, and somehow I don’t think you’re gonna break my face. Be a shame.” She tugged on the towel, and it dropped to the floor. “A hard-on like that would be a terrible thing to waste.”

Damn it, there were rules. “I’m your training officer.”

She nipped the point of his chin, and he stifled a groan. “I’m not allowed --”

“To use your position and power to influence me?”

Her bare breasts raked his chest, and his cock slapped his belly. “Something like that.”

“I don’t recall anything in the rookie handbook about werewolves. I think this kinda changes all the rules.” She sprang at him like a cat, and he had to catch her as she wrapped her legs around his waist, or let her slide down, far lower than he wanted her to go.

His cock smashed between them, the head pinned against what felt like an inferno. “God, you’re hot.” He lifted her ass a little higher, rubbing that delicious heat against the ridge of his cock head, moving slowly, his hips flexing to drag himself over her wet folds. “Are you trying to take advantage of me?”

“I might be. But you still stink.” She lowered her face to bump his head to the side, pointing him at the shower. “That way. Unless you want to put me down. I can walk.”