This one is in the "Coming Soon" rack, but it's one I'm really looking forward to releasing. :) 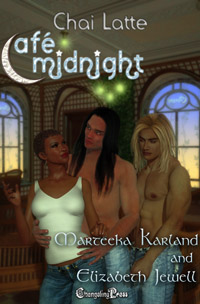 Jessalyn, on a sudden whim, said, "Kiss him."


Gunnar turned to Tam, his blue eyes darkening. “It’s been a while,” he said, then his wide, pale hand rose to cup Tam’s darker face, and he leaned in.
Jessalyn watched, the shortbread forgotten until she felt it break, crumbling to pieces between her tightening fingers. God, but they were beautiful together, Gunnar’s paleness against the sallow undertones of Tam’s skin. Tam’s dark eyes slid shut, his mouth tilting against Gunnar’s.
They'd done this before. A lot. And they liked it.