An Education in Love by Marteeka Karland and Shara Azod 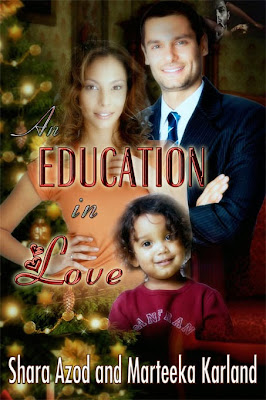 An Education in Love

by Shara Azod and Marteeka Karland


Loralei couldn’t believe she was actually doing this. From the second she took Duff Hendry’s hand, she knew she was in trouble. For one thing, he didn’t let it go until he saw her safely to her car. Even then, he didn’t leave, making sure her seat belt was securely fastened and that her car actually started before going to his own. She followed him to one of the city’s nicer restaurants. Not a roadhouse, but not a “dress-up” restaurant, either.

All the way, her heart pounded. It’s just a drink. Maybe a little something to eat. Don’t read more into it than it really is. He’s known you for years. What’s a little dinner between two acquaintances? Was she really having a conversation with herself? Yeah. She was.

Time to face it. Loralei had it bad for the man. Her student’s father, no less. While there were no rules against it, Loralei was sure there would be ramifications. But when Duff opened her door, held his hand out for her as he flashed that grin that made her insides melt, she forgot exactly why.

“I hope this place is all right with you. They serve a variety of food in case there’s something you can’t eat.” Not many men would have considered that. In fact, she had an allergy to shellfish. As a result, she just didn’t bother with it.

Looking into his eyes, Loralei felt like she was falling. Duff stepped closer, his superior height never more apparent than it was in that moment. Swallowing, she looked up at him helplessly.

“Loralei…” His voice was a husky blend of sin and sex, one she couldn’t resist. She knew she should, but what was girl supposed to do in the face off all that maleness?

Drawing in a shuddering breath, Loralei tilted her head up at him, not knowing what to do, what to expect. His hand came to her face, his thumb brushing her bottom lip as if he contemplated kissing her. Duff moved closer to her, his body a shelter for hers. Just when she was sure Duff would kiss her, he raised his head slightly, as if catching himself doing something he shouldn’t. Then he smiled before stepping back a step, giving her room but not vacating her personal space completely. Still, Loralei was surprised at the bitter disappointment. She’d narrowly avoided disaster, hadn’t she? If they kissed, it wouldn’t be an innocent outing. She’d have no plausible deniability.

Oh, God! Butterflies seemed to have been turned loose in her stomach as she struggled not to stumble all over herself. Not now? She wanted to grab him and scream “Why the hell not?” as she kissed him herself. But that wasn’t like her, and she just couldn’t bring herself to take what she wanted. Instead, she allowed him to take her hand, leading her inside.