Marteeka is proud to be a part of THE BESTEST Christmas box set on the market! Ten books with eleven of the best authors in the business, one low price! Pre-Order your copy today!

In the mean time, enjoy this excerpt from Marteeka and Shara Azod's contribution to the box set...

A Little Christmas Sugar
by Marteeka Karland and Shara Azod 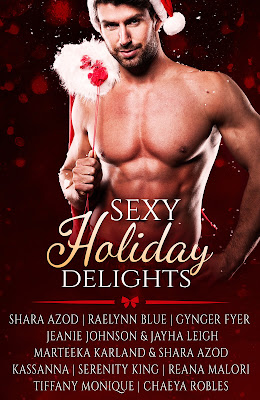 Through all her tirade, it was easy to see Carson struggling to keep his fierce demeanor. He’d lost the uninterested, bored expression the second he’d really looked at her. Now, he was losing the indignant, angry expression as well. It its place a look of something like awe took residence on his face and wouldn’t be chased away. That was just freaking weird.

When he didn’t say anything, she cocked a hip, resting a hand on it. “Well?”

He swallowed, then got a calculating look in his eyes that made Quinn immediately wary. Men like Carson generally looked like that when they were about to get all kinds of devious. Unfortunately for her, the look was good on him. Which was just straight bad. If Quinn had a weakness, it the bad boy. She liked her men intelligent, big, strong, loyal, with a very healthy naughty side.

“Okay, maybe we got started off on the wrong foot.” He fastened his suit jacket before standing and moving around his desk to stand before her. When he did, she caught a glimpse of why before the tails fell in front of him. The man was aroused. Extremely so. And he had a lot to arouse. “I suggest we start over.”

Quinn snorted, diverting her eyes from Carson for one fatal second. Truthfully that bulge was giving her all the wrong ideas. The next thing she knew, he’d grabbed her and pulled her against an impossibly hard body. And an impossibly hard erection. She gasped, sucking in a breath to deliver a scathing comment, but the second she opened her mouth, Carson swooped down, pressing his lips to hers.

At first, all she could do was stiffen, too shocked to do anything. But when his wicked tongue swept between her lips to flick against her own, something inside Quinn…shifted.

All her life, Quinn had this ideal about how a relationship should be. Her own parents had died before she’d had a chance to really appreciate the dynamics of romantic relationships but, though they’d never married, she remembered them as a very loving couple and doting parents. She’d always imagined they’d been like those men and women in fairy tales, the ones who knew the second they saw each other they’d spend the rest of their lives together. Well, she couldn’t say that about Carson Campbell, but his kiss more than curled her toes. It made her want to drop trou and proffer panties. Not that she would. At all. With a little helpless moan, Quinn kissed him back. If she was going to be helpless to resist him, by God, he was going to feel the same way about her.

“Just what the hell do you think you’re doing?”

“Kissing one of the most desirable women I’ve ever seen. You know, getting off to a better start than before.”