The Bad Boys of Boston 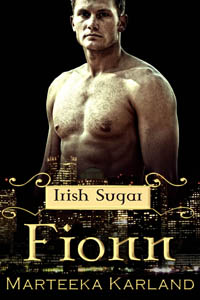 Ice fills my soul. Nothing matters to me but my brothers. I'd kill for them. Every death chips away at the hint of humanity still clinging to me. And when the day comes to pay for my misdeeds....I don't think about that... Until then I will bask in my transgressions allowing the passion of my chaos to keep me warm. I'm the thing you fear when darkness surrounds you. If you're in my crosshairs, you're as good as dead. My name is Fionn O'Shea. Death is all that matters...

She alone fills the gaps in my soul, returns my humanity. By protecting her, perhaps some part of me will be redeemable when I must answer for my sins. She brings order to my chaos, keeps me warm when the ice threatens to overtake me. If you threaten her, you'll pray for the monsters in the dark to take you. But they won't. I'll bring your pain. I'll bring your suffering. I'll live for nothing else...

Fucking two women at once was definitely not overrated. Anyone who said otherwise was either a goddamned liar, or hadn’t done it and was trying to convince himself he wasn’t missing anything. The blonde and redhead Fionn was currently enjoying certainly lived up to his expectations. Thankfully, the pair was available pretty much whenever he wanted them to be.

If he fucked them enough, one of the pair might remember how to say his name. Especially if he made them scream it enough.

As he tongued the pussy of the redhead while the other one sucked his cock with much enthusiasm, Fionn embraced the depravity of the act. He relished this. The rush of sex. It was the one thing that engaged his senses and made him feel…alive. The pleasure was good, the sensations of smooth skin and silky hair sliding over his body stimulating. Yeah. To say Fionn O’Shea loved sex was an understatement.

Rolling over, he pushed the blonde away from his cock as he reached for a condom. Sheathing himself, he mounted the redhead, who squealed in her excitement.

“I’m ready for you, Finn,” the redhead crooned, reaching for him. At least she’d pronounced his name right. More or less. Though, it lacked the delicacy of the original Irish. “Come give me the fuck of my life.” She gave him a saucy grin as she spread her legs wider, welcoming him atop her.

“My pleasure, sweet,” he murmured in the raspy voice he knew women loved. “Wiggle that little pussy on me.” As expected, she giggled and squirmed to fill herself with him.

Fionn sat back on his knees, pulling the redhead’s legs over his own as he thrust lazily, letting her do most of the work. While she danced on his cock, the blonde draped herself around his back, turning his head to kiss him hungrily.

Gripping the redhead’s legs, Fionn began a driving rhythm designed to take her just to the edge, letting her linger. It was a move he’d practiced many times, perfecting it over the years. He could do it with his eyes closed. Or, say, with his tongue tangled with that of another woman.

“Oh, yes!” the redhead screamed, twisting her hips, trying to grind on him to put more friction on her clit. Of course, Fionn was having none of it. She wasn’t coming until he said she was. And that wouldn’t be until he was good and ready.

Urging the blonde to her feet, Fionn ran the fingers of one hand along her slit, wetting them before he plunged two inside her. Her head fell back on a gasp, her nails gripping his shoulder as she rode the digits.

Yeah. This was the life.

His phone rang. Glancing at the screen, he saw it was his brother, Shannon. This could only mean work. Without missing a beat, Fionn answered the call.

“I need your assistance on a couple of jobs.”

Shannon, his full-blooded brother, was the enforcer of their…family business. He also ran some of the more questionable areas. The only time Shannon ever called Fionn was when he’d had enough. Which meant someone was going to die.

“More than one? So, it’s a good day to die. What’s the job?” Shannon knew there was no way Fionn would ever turn down a request for help, no matter what it was. As the second youngest of their brotherhood of four, Fionn was just as loyal and steadfast to his brothers as they were to him. Each possessed a particular skill set. Fionn’s just happen to be the ability to rain terror on their enemies and never get caught. Mainly because he was fast and careful. Ever efficient.

“First one is Magda. I need her gone.”

Fionn raised an eyebrow, but didn’t stop his fucking. “Can’t say I blame you. Bitch has had it coming for years. All I can say is, it’s about damned time.”

“Next one is a bit tricky. Bart Holten. He’s making a play for my girls. More at Basic Bitch and the Nunnery than anywhere else. Trying to offer them more money, but when they refuse—and they all refuse—he’s threatening them or their families. I don’t have to tell you the information I get from them is too valuable to lose. Besides, he’d likely have them all into drugs in order to control them and the flow of information. And I have a feeling this all the old man’s doing. He’s testing me. And he wants that information channel for himself.”

“You need him dead?”

“He have family who can be used for leverage?”

“Only one. Her name is LeeAnn Bates. He married the girl’s mother but didn’t give his new wife’s child his name. The fucker didn’t have enough sense to separate himself from her at the earliest opportunity. She lives with him in Beacon Hill.”

Fionn snorted even as he continued to pleasure the two women in his bed. “I wonder why she refused to leave. Keeping Daddy’s money close, no doubt.”

“Probably. In any event, she was seen with one of my girls who frequents the Irish, trolling for clients and information. Don’t know exactly what she’s doing, but quite likely she’s reporting to her father.”

“So, I take it I’m to snag her? Hold her until we decide how to deal with…our little problem?” Fionn might talk business in front of his women, but he didn’t invite trouble.

“Nab her. I’ll let her father we’ve got her. If he’s not a complete bastard, he’ll take the hint and back the fuck off. I’ll get my girl to bring her to the bar. Once she’s at the Irish, you can take if from there.”

“And if he doesn’t back down?”

Shannon’s voice went cold. Deadly. Much like Fionn’s own. Too much like their old man’s. “Then take care of him.”

Fionn ended the call and absently tilted his hips as he thrust into the redhead. He’d never left a woman unsatisfied and, even though he wouldn’t be getting off himself, he wouldn’t ruin his reputation this time.

“Oh, God! I’m coming!” When the redhead started bucking over his cock, whipping her hips at him in a frenzy, Fionn tickled the blonde’s clit until she too spasmed around him. Both women screamed as they writhed on him, sweat shimmering over their pale flesh in the lamplight.

But Fionn’s mind was already on the job at hand. He’d finish up here then begin his search for the woman. If all went well, he’d have her chained to a bed before nightfall. If things went even better, she’d be a beauty he’d convince to give him information as he bedded her. He’d have what he needed. They’d both have a pleasurable romp.