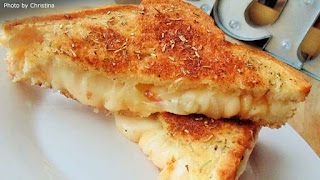 I'm on a lifelong mission for the perfect grilled cheese sandwich. Why? Because it's much easier to write if you rely on a sandwich based diet.

Simple ingredients, I know, but the trick is in the grilling, which took a lot of failed attempts until I got it just right.

Spread butter on both sides of both slices of bread. Then, heat up frying pan to minimum, melt butter and a dash of salt. This uses a lot of butter. It's not diet food.

Toast each side of each slice of bread lightly. Then add the cheddar to one slice; the mozzarella to another.

The double-butter effect makes the bread toastier and the sandwich crisper. It's divine!!! 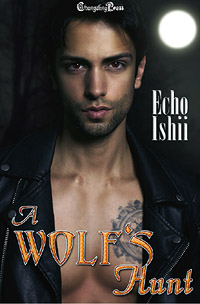 Zhang had nothing against London. It was a respectably large city, though a bit on the cold and rainy side. He had to get used to it. The cities in this part of the world weren't like those in the East and certainly not like those in the celestial realm where he did most of his business.
Still, Zhang had a job to do. He was here, by special request, from the Goddess of the Hunt herself. She ruled beasts and fighters and those with the wild nature. Creatures whose lives were ruled around the chase and the hunt. Shapeshifting creatures like himself.
He strolled through the pouring rain, past the shops and the streets and the taverns. Women in uncomfortably long dresses skittered past; orphans with not enough clothes shivered in the dark spaces between alleys.
There were so many more people in the world since the last time Zhang had visited. It was louder, busier, and the air was dirtier. The wild spaces were being encroached upon with frightening speed.
No wonder the Huntress was keen to have someone look after her earth-dwelling patrons. It was far too easily for them to become despondent and lose their way.
Zhang finally found the place he was looking for. It was a stone building, firmly built, but with broken windows and detritus surrounding the outside. If the excessive noise didn't indicate it as a place for a Pack meeting, then the smell of Wolfkin in rut certainly would.
Wolfkin. It had been some time since he'd dealt with any of them.
Zhang pushed open the door and stepped inside.
It was a Pack meeting all right: one part eating; one part fighting; one part rutting. Wolfkin conversed between bites of food and the occasional punch.
The hall was clearly too small for all of them. Rows of tables from one end of the hall to the other with chairs left barely enough room to walk between them. The Wolfkin didn't seem to mind.
The Wolfkin ignored Zhang. His scent gave off no threat, so few paid him any mind. Zhang was just one more figure lurking in the corners. He was dressed down for this event, having traveled for three days in human form. Dragon form was quicker but Zhang wanted to be low key. Besides, people might notice. Wolfkin sightings were easily explained away but Dragons took quite of bit of magical spellwork to conceal. Zhang wasn't in the mood to have to pay some greedy sorcerer just to cover up a sighting.
And then there was the sex. Zhang spotted at least three not so discreet encounters. Couples, triples, even enthusiastic solo practitioners. There was always a dark corner somewhere.
Zhang had no issue with group sexual indulgence.
Voyeurism? Oh those long, heady days in the temples of ancient Egypt.
Exhibitionism? Thank the gods for Persian pleasure chambers and a penchant for extremely accurate conceptual art.
Orgies? There was a time when 'Lord Prince Zhang' was known throughout Rome for his orgies. And in Rome, to be noticed for orgies was really saying something. May the First Fires bless those legions of Roman soldiers, Zhang thought with a sigh.
This public display of affections was not to Zhang's taste. Rolling around on the floor -- especially one of questionable cleanliness -- in a lust-filled fever was not his pleasure.
Besides, his only interest in the world of Wolfkin was sitting in a large chair at a separate table on a dais like a king in his throne. Stephen Skollsgaard, the Alpha of all the Alphas.
Stephen was a handsome bastard too.
Zhang kept close to the walls as he approached the Alpha Wolf. Two Wolfkin, reeking of alcohol, were having a heated argument nearer the front. One of them fell out of his chair at Zhang's feet. Zhang stepped over him with a sigh.
"Aye!" Another Wolfkin grabbed him by the shoulders. He was a large man with thick hands and menacing eyes.
"Do not touch me," Zhang said smoothly and confidently.
"That's my friend you stepped over," the Wolfkin said.
"That's your friend you pushed down." Zhang shrugged the man's hands from his shoulders.
"Are you Omega? A Lower Beta?" The man pushed Zhang again as his voice rose.
Zhang tolerated watching Wolfkin fight, but he had no intentions of being pulled into one.
Zhang pushed back his hood and locked his eyes on the Wolfkin. The man's eyes went wide. Zhang knew he saw the change, the flicker of fires from the First Fires that rose in Zhang's belly and now was simmering deep in his soul.
"Do you know what I am?" Zhang said.
The Wolf shook his head, unable to leave Zhang's gaze.
"Remy, stop," a voice boomed across the hall, and even Zhang looked over.
It was Stephen, of course. He made it across the room in short leaps until he was next to them both.
"Remy, take Cade with you." Stephen nodded toward the Wolf sprawled on the floor.
Remy backed down immediately. He reached over the prop his friend up, and the two shuffled back toward the group.
"Why are you here, Dragon?" Stephen said.