Only one more week until the release of Bohannon...

Bones MC 2: Bohannon is almost here! With the release, I'll also be giving away two $5 Amazon gift cards to two lucky members of my newsletter. Not a member of my newsletter yet? That's OK! You can sign up on this very blog! Sign up form is on the right sidebar.

Now, for a sneak peek at BOHANNON! 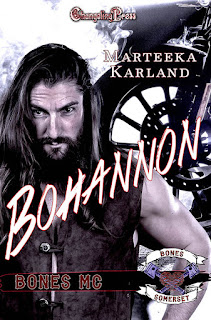 “Look,” she said, resigning herself to whatever fate awaited her. “I can’t stay here. I have to work. If I miss, I’ll get fired, and I can’t afford that. Besides the fact I need a place to live, I’ve got several loans to pay back before I’m truly free of Markus’s legacy, no matter what’s happened to him.” Bohannon just looked at her. “I mean, I can’t just not pay back what I owe.” Still he said nothing. “I have to work, Bohannon! I have to!” She was getting a little desperate. Though Luna knew he wasn’t letting her go, would likely use her part on the earlier misadventure to force her to stay, she had to try.
“You done?”
Fucker.
When she didn’t respond, he nodded once in a crisp movement. “Good. You’ll stay here until we fix this. After that?” He shrugged. “We’ll see.”
“What do you mean ‘we’ll see?’ You can’t keep me here if I don’t want to stay!”
Bohannon took the two steps separating him from her and pushed her against the nearby wall. When her hands automatically went to his chest, pushing at him, he snagged both wrists and pinned them above her head in one of his big hands. Luna gasped, her mind telling her she was afraid. Her body told an altogether different story.
It was stupid. He was asserting his dominance over her, not in a sexual context, but in a way to tell her not to go against him. To do as he commanded. Yet, she recognized the dominant lover he would be. His large body so completely dwarfing hers he could manhandle her, use her body for his pleasure and, as perverse as it was, the thought turned her on more than she’d ever experienced before.
Her breasts ached for his touch. When he pinned her body between his big frame and the wall, she nearly moaned in delight as his chest mashed against hers. Could he feel her nipples stabbing him? Did she want him to? It was all Luna could manage to not lift her leg to hook around his hip and thrust her pussy at him in invitation.
“No one said you’d stay here against your will,” he grated. His voice was husky. Menacing.
Sexy.
Luna couldn’t speak. She could be as cutting as the next bitch, but this man was so far out of her league she couldn’t form words. He oozed sex and violence. A combination she’d thought she never wanted to experience. Yet, she had the feeling there was nothing this man could do to her she wouldn’t enjoy. He was nothing like her. He lived in a world where the rules were vastly different, even though they resided in the middle of civilized society. What startled -- and scared -- her the most was to realize exactly how much she wanted Bohannon in that moment. Despite the situation, despite the circumstances, this was still her Gage. Her mind might scream “no,” but her heart screamed a resounding “yes.”
When she didn’t say anything, simply stood passively beneath him trying to process her own lust, he gave her a humorless grin. The look said he knew exactly what she was struggling with and welcomed it.
“I never keep women who don’t want to be kept. But I’ve been known to make more than one good girl turn rogue.”
The second her little whimper of need escaped, Bohannon took possession of Luna’s mouth. He knew he was being a bastard, but he’d been wanting to kiss her from the moment she’d stepped out of that goddamned truck. She was too beautiful. Too innocent. If he’d had any decency in him at all, he’d have locked her in his room and left. That wasn’t happening. He’d take whatever she wanted to give him and coax a few things she didn’t. When it was over, they’d go their separate ways and remember the pleasure they’d shared as a fond memory.