Shotgun is Live at Changeling Press! 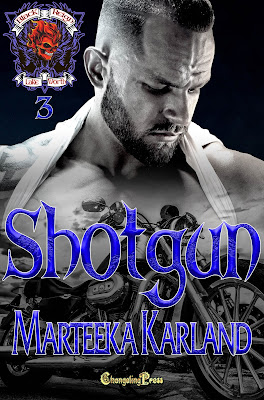 Esther: I was born and raised Southern Baptist -- a preacher’s daughter at that. If Daddy had his way I’d be a preacher’s wife, just like my momma. I want more. I want out. The only way I see to escape my father’s rule leads me to University of Miami to study cyber security. That is, until I walk into the wrong bar on the wrong night and… look up to see my knight on a shining Harley. Shotgun’s about as far left of Daddy’s expectations as a woman could get. And I may be damned for my sins, but I want him. He doesn’t know it yet, but he’s met his match.

Shotgun: My real name is Moses. Moses Blackstone… no relationship to the firm. For some godsforsaken reason, El Diablo has decided I’m going to learn Cyber Security. I got no clue why he thinks I’d be any good at this. Give me some heads to bash and I’ll be fine. But computers? I hate computers. But if I can’t learn this shit, I’ll fail in front of my club, and in the eyes of El Diablo.  When I wandered into that bar I was looking for a good fight. Or a good lay. Either would do. Instead I find a preacher’s daughter. And maybe my own salvation… 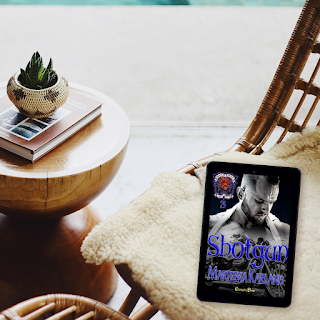 As if not realizing the whole bar was watching, a curvy woman waltzed in like she owned the place. Her head was up and her nose in the air, like she was better than everyone in the place and knew we all knew it. She wore a sundress of the palest green, the hem hitting her just above the knees and swishing around her legs as she walked. Modestly heeled sandals adorned her feet, the thin straps wrapping around her slim ankles several times. The heels were just high enough to make her calf muscles flex ever so slightly. Smooth, creamy skin beckoned every fucking biker in that bar. No doubt they were all imagining tossing her on one of the now-abandoned pool tables, pulling her legs wide apart and fucking the sweet pussy beneath that skirt.

“What’ll it be, sugar?” The bartender leaned against the bar as he polished a glass, biceps flexing as he did. Yeah, he was thinking the same thing we all were.

She cleared her throat delicately. “Um, a Coke, please.” Her voice was high pitched, like she was young. I knew that on first sight, but now I questioned whether or not she was even legal to be in here.

The bartender pointed to a little door off to the side next to the restrooms. “Coke’s in there. Buck twenty per gram. You pay before you go in.”

She nodded her head, then opened the tiny purse she carried around her neck and across her body. Girl actually pulled out a dollar and a quarter and handed it to the bartender. Now, he looked less than amused.

“One-twenty,” he snapped. “Even for a pretty little thing like you.”

The girl looked adorably confused. “But… I just gave you a dollar twenty-five.”

“I’ll spot her.” A big, burly guy pushed his way to the bar, a big grin on his face. He slapped two one-hundred-dollar bills on the bar. “You can start workin’ it off once you get the first line done.”

When she still looked confused, I knew me and Fury were about to challenge El Diablo’s orders. Getting the girl and ourselves out without killing anyone might not be possible.

“Don’t worry about orders,” Fury said, taking off his jacket and laying it on the bar. “Just get the girl and get out. Otherwise, we die and she’s fucked.”

As we shoved men out of our way, trying to get across the bar to the girl, the biker grabbed her upper arm and was practically dragging her toward the door.

“What are you doing?” Her voice had gone even more high pitched, and she was pulling against the biker.

“Takin’ you to get the coke you asked for.”

“Why is it back there? This is a bar, right? I just want something to drink!”

A roar of laughter went up at her proclamation, and the guy picked up the pace, now physically dragging the girl after him.

“No!” She twisted her arm, trying to get free. There was real panic on her lovely face, and something inside me just snapped.

The crowd didn’t try to keep me away, but the men just wouldn’t get out of my way fast enough. Several of them were following the couple to the back, obviously thinking she’d be way more agreeable once she’d done a line or two of coke. I shoved several out of the way, which prompted them to retaliate. The next thing I knew, Fury was mowing people down left and right and the fight was on.

I kept the girl in my sights as I took out one guy after another. Her captor didn’t seem to realize the chaos ensuing behind him or didn’t care. Probably the latter. He’d just reached the door when I caught up to them.

“Please!” she pleaded. “You don’t understand!”

“I understand I paid for a gram of coke for you. You’re just paying me back in the currency of my choosing.” He grinned at her, looking her up and down. The bulge in his jeans was obvious as he turned to the side to face the girl. Which was when I grabbed his head and smashed it into the door. The guy dropped like a stone.

She screamed, throwing her hands up, really panicking now. “Don’t touch me!”

“Easy, girl. I’m the one getting your sweet ass outta here without you getting raped. Get me?” She screamed and ducked, her hands over her head. “I said I was gettin --” Something slammed into me, knocking me into the same wall I’d smashed the other guy’s head into. She screamed again, and the pain splitting my head from the sound was worse than the beating I was getting. “Would you --” grunt, punch, “-- shut the --” kick, punch, grunt, “-- fuck up!”

I finally got the upper hand on the guy and flipped him to his back. Wrapping my legs around his middle, I got him in a chokehold with my back to the wall, and just held him there. I was positioned where I could keep an eye on everything until the guy quit moving.

Some of the men in the bar sat along the wall laughing and betting on who’d win. About eight had joined in the fight. I’d taken a couple of them out trying to get to the girl, but Fury was taking care of the rest. Like I’d let him have all the fun.

“Come with me,” I said, snagging her arm. She looked like she was in shock, but she didn’t resist, following me right into the fray. I put her between me and the bar since the bartender had backed off and seemed to be on the side of watching and waiting. “Stay down.” She ducked, and I jumped into the fight.

Fury was living up to his name. He laid into his enemy with fury and hate. Neither of us used a weapon, but Fury could kill just as easily with or without one. Three of the seven left were down. Fury threw himself at two of them. I took the other two. It was a short fight, but man, it felt good! One thing we never did was tear up a place if we got into a fight. It made things easier to get out of without involving the cops. Though the other guys weren’t so discriminate, we managed to keep most of the damage under control.

I whooped and hollered as I beat the shit out of several of the pricks. This was better than street fighting because my opponents got in fewer hits, and I still got to beat the shit out of someone. I couldn’t contain the laughter as I took on one after another of the men charging me. After I fought the last one off, I let my head fall back and let loose a howl of glee. Fury just gave me a “really?” look. I couldn’t help it if I liked beating the fuck out of deserving men. Call it a character flaw.

One last guy came at me with a cue stick, swinging madly. Honestly, this was exactly what I needed. A good old-fashioned bar brawl.

“Little puke,” I bit out as I ducked one swing then lunged away from another. “Know when to fuckin’ stop.” When he lunged in again, I snagged the cue stick from him and swung at his head, landing a hard blow to his temple. Blood sprayed, and the guy went down hard. I looked up and met Fury’s gaze on the other side of the room. He calmly pointed at me, his mouth open but not saying anything.

Then I heard a screech, a crash, and a thump. I turned around, and my little innocent kitten stood over the first guy, the one who’d dragged her off in the first place, with a broken cue stick in her hand and a fierce scowl on her pixie face.

“You’re not a very nice man,” she said, breathing hard. The little sundress she wore strained to contain her heaving tits. She glanced up at me, and I could see it in her face. The fight, much as she was trying to get a handle on it, turned her on mightily.

I grinned at her. “Nothin’ like a good fight.”

“I-I d-don’t think f-fighting is the answer,” she managed to get out. Her bottom lip trembled, but her face was flush and before my avid gaze, her nipples hardened under the fabric of her dress.

“No,” I agreed, then grinned at her. “But it sure is fun.” I held out my hand to her, and she gave me a startled look.

“All kinds of, honey. Now come on. I promise you don’t want to stay here.”

GRAB IT TODAY AT CHANGELING OR PREORDER AT ALL MAJOR VENDORS! 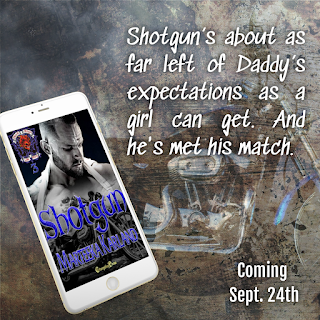