Want a little taste of Shadow? 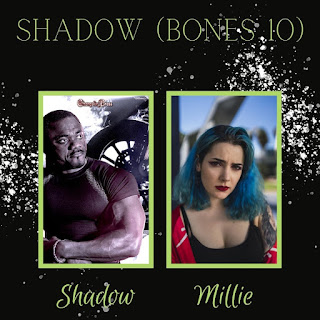 “Look,” Venus said, her voice barely above a whisper. Had he not been so close to her, Shadow wasn’t sure he’d have heard her. “There she is.” The woman looked proud as a motherfucker. Her smile was carnivorously, viciously gleeful. Shadow couldn’t blame her. “My little sister, Lyudmila.”

“Handful of a name,” Shadow commented as he sized the girl up.

“Handful of a girl.” Venus grinned. “Always was. I called her Millie just to piss her off, but it stuck.”

The man they carried out of the ring wasn’t as big as Shadow, but he was just as muscular. That wasn’t the issue, though. The woman who’d fought him stood in the corner of the ring, braced on one hand against the turnbuckle, her hip cocked. She had short-cropped hair dyed in several shades of blue from a pale turquoise to nearly black. In her other hand, she had a joint she pulled from occasionally while they cleaned up the mess behind her. And she might have been five feet tall. Maybe. If she were in heels.

The little thing wore a black vest and black pants. Both looked to be leather. Both were studded with silver spikes at the seams and around her waist. Matching black wristbands accompanied the vest and pants, as well as a studded dog collar. She wore dark makeup over her pale skin so that around her eyes was blackened, and her cheeks were highlighted in a very dark blue that matched her lipstick. Rounding up the outfit were thick black boots. All in all, very Gothic. With that outfit, Shadow expected loads of piercings and tats but saw none. Not even a piercing in her delicate earlobes. The closer he got, the more she appealed to him. He couldn’t help but grin.

“I think I’m in love with your sister, Venus. Just throwing that out there.”

Venus chuckled, but there was no humor in the sound. “Good luck with that.”