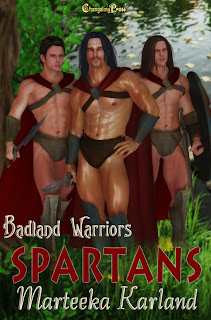 Lysander, Calix, and Thanos are warriors currently patrolling inside the Badlands. Unlike most Warriors, they are not podmates -- at least, Thanos is not. The two older men took him in when his two podmates were killed. The bond among the three of them has grown steadily, but Thanos always holds himself back. He does not share his body freely with the other two men unless the need is so great he can't resist.
Artemis has been watching the trio for some time. She knows Thanos has a horrible secret about the death of his podmates, but he's a good man nonetheless. She's also intrigued that these men are truly Spartan warriors, unlike so many second generation Warriors created by the WCGA. That aside, she's drawn to them and knows they are her true mates.
She just hopes she can break through Thanos's grief and guilt before he does something stupid. Like letting himself get killed.