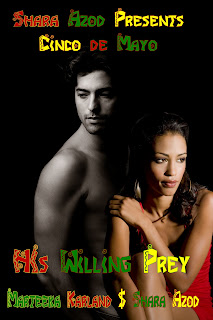 His Willing Prey
by Marteeka Karland and Shara Azod

Joaquin wants Dawn with a passion that borders on obsession. She was his sister's best friend, and so he'd always considered her off limits, but he could never run away from her. Her presence in his mind was the only thing that kept him going at times. The rigorous training in the marines had been grueling, dirty work, but thoughts of her had helped him then and on the endless missions everywhere in the world. When his sister, Carmen, had written him that Dawn was seriously dating another man, Joaquin knows he has to make his move now, or lose her forever.
There has never been another man for Dawn other than Joaquin. Sure, she's dated guys and had her fun, but Joaquin was always her ideal of the perfect man. Unfortunately, neither of them is willing to make the first move.
That is, until Joaquin sees Dawn with his arch rival. Things just go up hill from there…
at 20:31