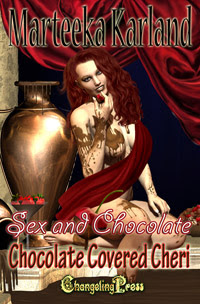 Chocolate Covered Cheri
ON SALE FOR ONLY ONE PENNY!


Jedadiah Blackheart has had one thing on his mind since the company Christmas party and that's getting his assistant, Cheri Dodson, armpit deep in a vat of chocolate so he can lick it all off. When his company lands the Choco Chocolate campaign, Jedadiah finds a way to live out his ultimate fantasy.
Cheri knows Jedadiah is up to something when she sees his inner sanctum turned into a chocolate lover's paradise. And she's sure whatever it is, it's certainly no good for her.
Or is it?
Sex and chocolate is always a good thing.

Jedadiah tinkered with the cameras and made sure all the remotes were covered in plastic. He’d sent Cheri off to dress in the bathing suit that matched her hair exactly. It was conservative enough to keep her comfortable, but he didn’t plan on her wearing it very long. He’d kept his jeans on, but he didn’t plan on wearing them very long, either. Which was probably a good thing because his cock was cramped inside the tight denim.
This was it. Licking chocolate from Cheri’s delectable body would be the greatest pleasure of his life. Thus far, anyway. He planned on having many more pleasures from her, assuming he could convince her to let him. When she entered the room, she was covered throat to mid-thigh in a white terry robe and looked like she was going to her doom.
“Where do you want me?”
Jedadiah opened his mouth to say, “In my bed would be nice,” but he covered the statement by clearing his throat. “Over there,” he finally managed. “By the chocolate mousse. Keep the robe on for now.”
It was time to go to work. Jedadiah tried to clear his mind and get the necessary shots so he could put this project to bed and do the same with Cheri, but it wasn’t going to be easy. Even not trying to be sexy, Cheri was everything he found sexy in every woman he’d ever admired. She had her back to him, and the robe hugged her ass just the way he wanted to.
He swallowed and shook his head once. He could do this. The quicker he got finished, the quicker he could explore other activities.
Cheri turned to face him. She stood by a table with the dessert displayed in a tall, clear crystal dish with an intricate pattern etched into the glass. A silver spoon lay on the lace cloth covering the table. All the preliminary shots were done. All he had to do was get a few of her doing various things before they moved to the fountain. He’d join her then.
“OK,” he said, anxious to get things moving so he could get to his dessert. “Pick up the spoon first, then the mousse. Look at the camera and smile.” She did, but she looked anything but relaxed, so Jedadiah tried a different approach. “Hmm. Lay the spoon back down and scoop some of the mousse up with a finger. Not a lot, but enough to get a taste.”
“Look.” She blew one stray curl from her forehead, and Jedadiah almost lost focus again. That curl made him want to tangle his fingers through her hair as he -- “If I’m going to do that, I want a good taste. Like this.” Cheri scooped up a big dollop off the top with her finger and held it there. She raised an eyebrow and looked straight at Jedadiah a moment before slowly and deliberately sticking the digit into her mouth and sucking off the dark, fluffy chocolate.
Jedadiah swallowed. “Do that again.”
She did. This time, she took a dollop from the side and, just as slowly, just as deliberately, she stuck her finger into her mouth. When she pulled her hand away, she’d left a dab on her top lip. Her tongue darted out to lick the little bit away, and Jedadiah had to bite the inside of his cheek to keep from saying to hell with the whole thing and just jumping her.
“That’s it. Again.”
She did, never taking her eyes from Jedadiah.
“OK. Same thing, but wait for me to join you.” This would be great footage, but Jedadiah was more concerned with getting back into Cheri’s arms. Well, that and painting her body with the mousse and licking it off. Somehow, he doubted she’d let him do it that easily. He set the digital cameras to capture and checked both computers to make sure the feed was indeed recording, then he took his place beside Cheri.
She didn’t take her eyes off him, but slowly scooped up another finger-full and brought it to her mouth. Jedadiah brushed the missed chocolate from the corner of her mouth and laid his finger on her lips. She stuck out her tongue and licked the digit once. Up until that moment, Jedadiah thought she was totally unaffected by what she was doing. Then he saw her swallow and felt the slight tremble of her lips.
“Do you have any idea what you’re doing to me?” Normally, Jedadiah wouldn’t like the husky whisper he’d been reduced to, but if he helped her understand how much she affected him, he didn’t really care.
at 12:33