AVAILABLE NOW! Dr's Orders from ARe 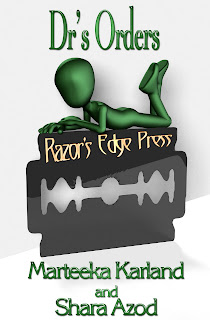 
Dani's in need of some medical advice. A late night examination proves Dr. Sander has the cure for her condition -- as long as she follows the Dr.'s orders. Medicine has never been so easy to take.

Dani squirmed in the little chair behind the nurses' station, trying to concentrate on anything but Doc Bergman and all his Scandinavian deliciousness.

"Call me Sander," he'd said in that yummy, deep, accented voice. "There's no one here but the two of us most nights, anyway."

Hence her biggest problem. She had no business feeling all carnal toward the doctor she manned the rural clinic with from nine at night until five in the morning.

Because of budget cuts and an abysmal economy, the tiny clinic masquerading as a hospital could only afford to employ one doctor, a general practitioner, and one nurse practitioner for the shift.

Dani preferred nights. It was a heck of a lot quieter than during normal business hours when people generally came in. Only five of the ten rooms were occupied at the moment. Nothing too serious -- serious cases were Medi-Vaced to County General immediately -- but serious enough that they couldn't go home. The patients all slept through the night, more or less.

Of course, Mrs. Martsten, a regular patient, was eighty-seven going on five with no one at home to look after her. The daytime doc just wanted to make sure she was taken care of.

So here Dani was. The all-too-handsome European transplanted MD leaned over the counter, giving her such a wicked grin she swore her panties had melted. Damn it, she was wearing powder blue scrubs -- she couldn't afford to get this wet, and with no touching to boot. It was criminal the way that man could make her feel.

"So are you going to help me with my little problem, Nurse Ellison?" Lord, but he knew how to pour it on thick. Her cunt spasmed just from those ice blue eyes trailing her body as if she were sitting there in the buff.

Yep, he needed to be arrested right away. He was dangerous to the female population. "I see no evidence of any medical malady, Doctor Bergman." She, on the other hand, definitely had a fever. And heart palpitations. And way too much estrogen running amok through her body.

"You think not?" Oh, he just had to go and step into the tiny nurses' station, didn't he? "And what is this if not a problem?"

Although Dani knew she really shouldn't have, she looked to where one long, thick finger was pointing. Her breath caught, and beads of sweat popped out on her forehead. Good Mother Mary and the Three Wise Kings -- that could not possibly be real. The erection pressing insistently against his scrubs was one impressive log of pleasure just waiting to happen. Her mouth started to water, and one of her legs was moving up and down as if it wanted her to jump, and jump now.

"I look at you, and this happens." Sander had the nerve to look all lost and forlorn as he shook his head sadly. "No other woman does this to me. Only a cold, hard nurse who refuses to give me even a little kiss."

Bullshit on top of bullshit, and Dani could care less. It sounded so damn good she would swallow that bullshit whole and ask for more. She really needed to get away from this man before she did something stupid. Instead she sat there like a bump on a log as the sexy Swedish man moved closer and closer until he was right there, bending down over her.

"Why do you not give me just one little kiss, Dani?"

How the hell was she supposed to say no to all that scrumptious maleness all up in her face like that? His exceedingly kissable-looking lips inched toward her, and Dani didn't move back. She wouldn't admit to a soul that she leaned into him. Not ever.
at 14:13