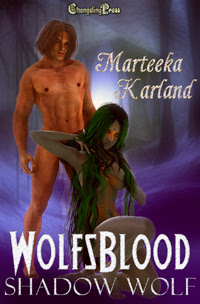 Struggling to save her pack in a fight to the death, Leiah has no clue what she's in for when the Shadow Wolf, Rikker, intervenes. In one swoop, he claims her and threatens to take her away from the only family she's ever known. Leiah rejects his claim, even though she craves him as much as he craves her. Can these two Shadow Wolves find a balance before Leiah's beloved pack is torn apart?

Leiah watched Rikker and young Wylliam from above, carefully hidden in the rocky cliffs of the cave. Surprisingly, he was gentle with the boy, putting him through exercises and defensive moves that could save the child’s life. He praised the boy many times, never showing the least amount of impatience even though she knew the hardened warrior in him had to be rolling his eyes in protest. Despite not wanting to be involved with her pack, Rikker was a good teacher.
Inwardly, Leiah wept. Boys like Wylliam should be children, not warriors. She hated the world they'd been born into. It was a cruel place. Perhaps she’d been wrong not to teach them all she knew. Hell, she knew it had been wrong, but the female in her couldn’t quite get used to the notion that children had to be warriors too.
Her attention on her own musings, she wasn’t aware of Rikker sending the boy off until he spoke to her from his position beneath her. “Are you going to sit up there watching me all day or do you want a lesson as well?
Leiah thought about ignoring him and leaving, but the truth was, she needed his expertise. They all did. She doubted many would seek him out, but if she learned what he had to offer, she might be able to pass on something that could save them all. Without further consideration, she climbed down the ten or so feet of rock face to stand in front of him.
Without hesitation, she swung at him, a vicious right hook that should have caught him on the jaw. Instead, he leaned back, dodging her closed fist by inches. She expected him to catch her hand as he’d done before, but he didn’t. Instead, her momentum took her past him and he shoved her back. Leiah had expected the move when she failed to connect with his strong hand and continued to spin until she faced him once more. In the same fluid movement, she went low, throwing a spinning back kick to his knee.
Again, Rikker dodged her attack. When she continued to spin, he caught her neck with his large hand. Surprisingly, his touch was gentle, not biting or in any way hurting her. Well, other than her pride. He was handling her and that made her furious. He gave her a slight grin, letting her go and stepping back, obviously readying himself for her next attempt.
Over and over, Leiah rained blows on Rikker. Some connected, though they didn't deal out the damage she’d intended. Most missed entirely. He was a big man, but surprisingly agile. Every time she thought she had the upper hand, she would find herself in a suddenly vulnerable position. Through it all, Rikker never laid a hand on her in offense.
“Enough,” he growled out finally. When she only launched herself at him bodily, he caught her in midair, spun her around, and wrapped his arms around her from behind.
Leiah wanted to scream at the top of her lungs. No one had ever beaten her so thoroughly. And he hadn’t even broken a sweat!
“Bastard!” She couldn’t think with his big frame wrapped around her. His arms bulged with heavy muscles, imprisoning her. For the life of her, Leiah couldn’t think of any place she’d rather be. The thought frightened her beyond belief. This man would take her away from everything she loved if she gave in to him.
“Shhh...” His whisper was right next to her ear. Warm breath fanned her face, and her womb clenched. Leiah remembered all too vividly what it felt like to have him pressed against her nude body. All that hard muscle wrapped around her like he wanted to surround her in a cocoon of erotic pleasure. She tried not to melt on the spot, but it was difficult at best. If he suspected how much she wanted him -- even right there where anyone could come upon them -- he’d take advantage of her vulnerability and press his claim. There would be no way she could resist him if he did. “That’s enough, little warrior.”
“I knew I was wearing you down,” she said, trying to get under his skin as effectively as he’d gotten under hers.
“You’re making me hard,” he said in a gruff growl. “And the next time I come, it will be deep inside you to plant my child.”
at 19:39