I'll let the blurb speak for the book... 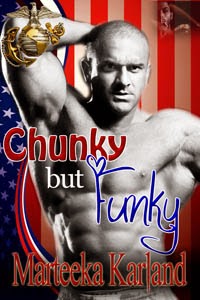 Dalton Colt is what one would call a bad ass motherfucker. If one weren't in the same room with him. If one was in the same room with him, one simply called him “Sir.” Six feet, seven inches tall, he weighed in at nearly three hundred pounds. One hundred percent of him muscle-laden, proud-as-fuck United States of goddamned American bad ass Marine. The very last thing anyone wanted to do was to piss him off.
Harassing his woman was a damned good way to piss him off. It didn't matter that she wasn't really his woman, it was implied. Fortunately, that was an oversight he was about to fix. But convincing the plus sized, ebony beauty she was the one for him might prove to be his most important mission to date.

“Got a little baggage there, doncha, hun?”
If Amanda heard that stupid question one more time, she wasn’t going to be responsible for her actions. Instead of responding to the brute, she pretended she didn’t hear over the noise of the bar. It was easily plausible, plus it avoided a confrontation she didn’t want tonight.
“Looks like a couple of basketballs rolling around in those jeans.”
The guys at the bar next to her just wouldn’t quit. The tittering laughter of the anorexic-looking women on the other side of her, combined with the way all of them looked her up and down with disgust was just too much. How the hell was she supposed to ignore all this when they were practically in her face? Tossing back the shot of Jack in her glass, she turned to face the guys.
“I may be fat, but you’re ugly. And I can lose weight.”
“Ohhhh!” One of the guys grinned at her, siding closer. “Good one, baby. They say sex is great at burning calories. How about you and me see if we can work some of that off?” The infuriating bastard had the nerve to look her up and down as if he liked what he saw even after his insulting remarks.
“No thanks. I’d prefer being fat to having sex with you.”
Again, a collective “Ohhhhh!” followed from several men and women at the bar who’d been watching the exchange. The guy didn’t seem particularly put out, but he did have an annoyed gleam in his eye.
“You should be thankful I even asked you,” he said. “It’s not like you’re going to get much action.” And again, he looked her up and down, sneering as he did. “A good month or so on Biggest Loser would really do you good. I can hook you up with a personal trainer if you’d actually stick to it.” He turned to his buddies and chuckled, as if he’d gotten the last word on the subject.
The fucking nerve! If it wouldn’t be a waste of a perfectly good shot of Jack Daniels—and if she hadn’t already downed hers—she’d have thrown a drink in his face. As it was, she resorted to the next best thing. She slapped him. Hard. Peals of laughter and outright guffaws erupted all around her.
“What the fuck?” The man stumbled back into the bar, knocking over a couple of drinks in the process. “You fat bitch!”
He raised his hand, obviously to return the blow, but something stopped him. His gaze focused on something behind her, freezing him to the spot. His face grew pale and he stumbled backward again. This time, he tripped over the barstool and landing on the floor flat on his ass.
“That’s right, tough guy,” a familiar male voice growled. Even over the blaring music and people trying to talk over said blaring music, Amanda would have known that voice anywhere. And she cringed with embarrassment. How much had he witnessed? “You will get the fuck out. Now.” A huge, heavy hand settled gently on her shoulder, a sharp contrast to his words. His show of possession sent a spike of longing through Amanda like nothing in the entire universe could replicate.
Dalton Colt, a descendant of the Samuel Colt, was what one might call a badass motherfucker. If one weren't in the same room with him. If one was in the same room with him, one simply called him “Sir.” Six feet, seven inches tall, he weighed in at nearly three hundred pounds. One hundred percent of him muscle-laden, proud-as-fuck United States of goddamned American badass Marine.
Most guys would have phrased that demand a little differently. It would go something like, “If you don’t get the fuck out now…” followed by “then I’ll…” Not Dalton. There didn’t need to be an “if/then” clause because whatever the “then” happened to be, no one in their right mind wanted any part of it. Apparently, that included the dunderheaded idiot sitting on the floor with his mouth gaping open.