Since I've neglected my blog for a while, I thought I'd post an never before seen excerpt of A Hero to Dance with Me. Just for my blog followers. :) 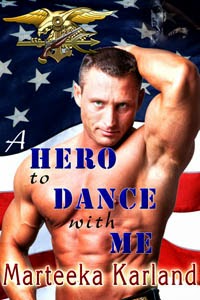 Jezelle (Elle) Temple is a favorite employee at the Wildcat Roadhouse in Lexington, Kentucky. Not only is she sassy and spunky, she's sexy as hell with her innocence and girl-next-door looks. When she dances...well. Badass SEAL, Steve Carver never had a chance.

While Elle isn't the type of girl to take just any man to her bed, there's something about the brooding SEAL that draws her like a moth to a flame. If anyone needed her bubbly personality, it was Steve Carver. Unfortunately, one night seems to be all Steve is interested in, leaving Elle with a broken heart and a lasting memento of their one night of shared passion.

Knowing he royally screwed up, that he left behind the one thing in his life besides his family that was pure and good, Steve returns to Elle . Unfortunately, his sweet little dancer is no longer soft toward him. If anything, she looks at him with indifference, her dissolution obvious. Unable to let her go, Steve still pursues her, thinking that he won her once, he can do it again. But Jezelle has a secret she's guarding close to her heart. One that will change Steve's life forever, making winning her heart more important than ever.

"How did you know I'd be out back?"
Steve gave her a wolfish grin. "I hounded your manager until he did exactly what I wanted to get rid of me. Besides. He's an old friend."
"In other words, he sold me out. Figures," she harrumphed, crossing her arms over her chest.
"Come on." Steve grabbed her arm and pulled her forward. A shiny black F-150 sat next to the curb, running as if ready to make a quick getaway. He helped her up into the jacked-up ride on the drivers side. When she would have slid over to the passenger side, he stayed her with a big hand on her thigh. "Don't."
"Safety first," she squeaked. "I need my seat belt." In response, he reached around her and fastened her into the middle seat belt. "I didn't know they still made those," she muttered.
"Show me where you live." Steve pulled out of the parking lot, following her directions. Her apartment building was only a couple of minutes away and before Elle truly had a chance to process her situation, they pulled into the parking lot and he'd dragged her out of the truck.
"I don't normally do this, you know," Elle said as she fumbled with the keys to the door.
"And you won't ever again," he growled.
After a couple of unsuccessful attempts to open her door, Steve simply took the keys from her trembling fingers and did it himself. No sooner did he shove her inside than Elle found herself against the banging door with Steve's big, muscular body pressed against hers, his mouth finding hers with a desperate, possessive hunger.