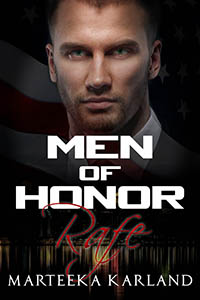 With a sharp yank, Rafe jerked her forward to the edge of the bar. Clever fingers found her pussy—no panties made it easy—stroking and probing with an expert touch. Rafe left her lips to find one nipple with his mouth. “God,” he growled around one aching peak. “I’ll never get enough of you!”
The admission drew a cry from Amanda as he began to suck strongly at her breast, his hand pinching and rolling the other nipple. Last night, they’d explored each other. Though she knew he’d enjoyed himself—he’d come nearly as many times as she had—he’d watched her so intently it was nearly uncomfortable. Now, she realized he was learning her body. Her reactions. Everything that had driven her mad the previous evening, he did today. After the brief respite, she was needy and wanting again, probably even more than she’d been initially. There was none of the nervousness of her first time now. She also discovered she needed it a little rough, and Rafe was giving her exactly what she needed.
He bit her nipple gently, making her yelp. The sensations he caused with that one little bite of pain brought her back to the moment with a dizzying swiftness. Last night no longer mattered. The danger to her might as well not even exist. All she cared about was this man. Rafe. The lover she’d always craved and never thought she’d have.
“You’re so responsive,” he said gruffly as he moved his way down her body. Her ribcage. Her belly. Her navel. Rafe explored every inch of skin and still he went lower. Lower.
Pushing her legs farther apart to wedge his shoulders between them, Rafe took a long, slow lick at her cunt. Then he groaned and simply buried his face there and began to suck, lick, and nip until Amanda gripped his hair in both fists as she writhed against his mouth. Of all the things she’d ever experienced before, of all the things Rafe had patiently introduced her to last night, this was by far her favorite. The wicked man knew it too. His tongue licked all around her lips, sucking each one several times before plunging into her cunt. Her clit ached with need, but no matter how much she tried to maneuver him in that direction, Rafe resisted, drawing out her pleasure.
“Rafe!” Amanda gasped, her body on fire with the raging need he’d so effortlessly stoked. “Oh, God! Rafe!”
“That’s it, baby. Tell me how you feel.”
The rush of her orgasm nearly made Amanda black out. Hot and brutal, the wave crashed over her with deadly intent. She thought she’d get used to the ecstasy Rafe brought her, but no. Each time seemed to make her hungry for more. He’d said he would never get enough of her. Amanda knew she wouldn’t get enough of him either. No matter where their lives took them next, she’d always want what only Rafe could bring to her. Unimaginable pleasure.
Her scream was unfettered, ringing out through the suite. And probably the hall. And the suites next to them. Rafe didn’t seem to mind. In fact, he stroked her clit with his tongue until she finally whimpered and pushed him away.
He didn’t stop though. Only stood, shoved down his jeans, and aimed his cock at her entrance. With one swift stroke, he entered her, clasping the nape of her neck so that she had to look straight into his eyes.
“You’re mine, Amanda.” His voice was gruff, commanding. Amanda could easily hear him using that tone of voice to command men in battle. Had he? “Say it!”