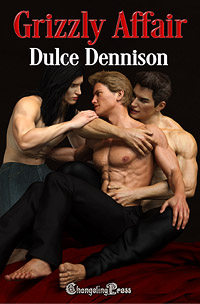 Publisher: Changeling Press
Cover Artist: Angela Knight
Genres/Themes: Paranormal, Suspense, Interracial, Men in Uniform, Gay
Length: Novella
With a rogue shifter on the loose leaving a trail of bodies, it isn't the best time for bear shifter, Roarke Hilliard to have his heat cycle. Especially since he's the lead Special Agent on the case. But nature must take its course. When his partner, agent Spencer Malloy, places himself in Roarke's path during his greatest time of need, the bear is worried he might break the human. But Spencer wants Roarke badly... bad enough to call in a paranormal escort.

Grigore Gabor may be a male escort, but he's never slept with any of his clients... until now. The moment the wolf shifter gets a whiff of the bear who hired him, and his human companion, he knows he's found his mates. But getting the surly ursa to agree is another matter.

With a killer on the loose, now isn't the time for finding true love. With Roarke handicapped by his heat cycle, there's only so much the agents can do against the rogue shifter. They can only hope to bring the man to justice before another body is found.

Excerpt
Special Agent Roarke Hilliard, Bureau of Paranormal Affairs, scented the air as he scanned the crime scene for clues. Darkness filled him, narrowing his world to this one moment. Blood soaked through his pants and coated his hands as he knelt beside the too still, mangled body. The copper tang of the teen's blood teased his nostrils. His nose flared as he searched for other scents. Gunpowder residue and the stale smell of sweat hung heavy in the air.

A gun was clutched in the young man's hand, his fingers gripping it even in death, and yet the weapon hadn't been able to save him. Slashed across his sternum, the killer's claws had dug deep, all the way to the bone. His clothes were torn in other areas. His belt had been partially torn from him. The clues were adding up to a terrifying, grisly picture.

This wasn't the first victim, and if Roarke couldn't catch the bastard responsible, it wouldn't be the last. Up to this point, the killer had targeted male prostitutes. But this one was different. There were no indications of drug use, no condoms in the victim's wallet. Was the killer branching out? Or were his tastes changing?

"This is definitely our guy," Agent Spencer Malloy said as he surveyed the scene. "If we don't catch him soon, we'll be on every channel in the country. You know how much the Bureau hates bad publicity."

Roarke stood. "There has to be a pattern. The first known victim was in Chicago. The second was in South Bend, Indiana. But now, victim number five is in Atlanta. Where is he going?"

"I still say they aren't planned. I think our guy is picking up young men, then he gets frustrated when they won't give him what he wants and he kills them."

"They're prostitutes living on the streets. There isn't much they won't do for the right amount," Roarke reasoned.

"What's that super sniffer of yours telling you?"

"I don't smell semen. I don't think he got very far before he killed this one. Maybe that was his motivation. Either he couldn't get it up, or the victim resisted." Although he could be wrong. Roarke wasn't about to admit it to anyone, but during his heat cycle his nose was not the most reliable. It took every effort not to turn bear the closer the time got.

Spencer ran a hand through his short, blond hair. "I don't like this. Rogue shifters are one thing, but one bent on murder?"

"The lab ran the sample three times," Roarke reminded him. "No match was found in the system, but the DNA suggested a hybrid."

"Which explains the instability," Spencer muttered. "He obviously has impulse control issues. My gut says there are more murders. Unless some switch flipped in this guy's head, there's no way his first murder was last month. Not unless he was just turned, and what's the likelihood of a just-turned hybrid?"

Roarke sighed. "I'm afraid I have to agree with you. We need to have records run a search on all unsolved shifter related homicides nationwide for the past five years, see if anything pops up that matches our guy's MO."

"I'll call it in while you check out the rest of the scene. Maybe we missed something on the first walk through. Then you're going to the hotel for a shower and a change of clothes."

Roarke nodded and looked around again. He began a slow circuit of the space, sniffing for something he might have missed as his gaze touched on every square inch of the room. He knew from experience they wouldn't find anything new. Fingerprints and DNA did them no good when the killer wasn't in the system. According to the shifter laws of 2023, formed when shifters came out of hiding, all shapeshifters were required to have DNA and fingerprints on file with the government. Those who didn't comply were termed "rogue" and would be put to death if they were found to have committed a heinous crime. If you weren't registered, you didn't have rights.

Spencer motioned to him from the doorway and Roarke stepped out into the sunshine. With the smell of death and decay surrounding him, he'd forgotten how beautiful it was outside. Spring was in the air, which spelled trouble for a bear on a never-ending job. The urge to mate would hit him hard and Roarke would be powerless to stop it. Last mating season, he'd damn near lost his job when he'd holed up in a motel room for three days with a willing male from a shifter run escort service... he might do well to keep their number handy.

"I passed on our thoughts about there being more murders and Rawlins said he would put a team on it." Spencer began walking toward their SUV. "He asked why the hell we couldn't have thought of that weeks ago. I told him we were too busy chasing a trail of mangled bodies. Pompous ass."
Roarke grinned.

"I say we go get you cleaned up and grab a bite to eat. We missed lunch and I know that beast inside of you has to be starving." Spencer held out his hand. "Keys."

Roarke pulled them from his pocket and handed them over. He climbed into the passenger's seat and patiently waited for Spencer to get in and start the vehicle.

"Speaking of my beast, there's something you should know," Roarke said as they pulled out of the parking lot. "My mating heat is going to hit soon. Since I don't have a mate, my bear is going to seek the first willing male available. It's going to possibly put me out of commission for a few days."
"So we take a break."

Roarke shook his head. "The mating fever is going to hit our killer grizzly too. It means more murders if he can't find someone willing and able to handle the frenzy. Think double or even triple the body count we have now."

"Fuck. We have to catch this guy!" Spencer slammed his hand against the steering wheel. 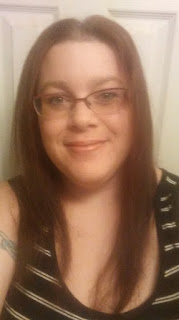 With an overactive imagination and a penchant for making up stories, was it any wonder Dulce Dennison decided to be an author? From cowboys to shapeshifters, she has a story for them all, but her passion lies in writing m/m romances. Dulce believes in love in all shapes and sizes, and that everyone deserves a happily-ever-after.

Married since 2000 to a man she isn’t sure is quite human, her husband and children (which she fondly calls the demon spawn) keep her busy, but never too busy to write. Is there such a thing as too busy to write? Most mornings you can find Dulce set up with her laptop, a cat curled up next to her, and a steaming cup of coffee just an arm’s reach away.