Not all Demons are bad... 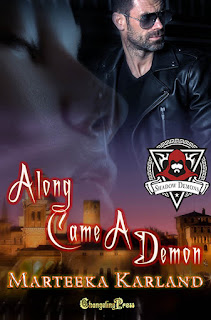 He met her gaze steadily. When she turned away, he took the few steps separating them and cupped her face, forcing her to look at him. "In the meantime, I want you to cooperate with Mrs. McDonald when she brings you and Rose clothing or anything else she says you need. Don't fight her." Another tear slipped down her cheek and Merrily tried to free herself from his grasp. Alex was merciless, putting his other hand on the other side of her face. "Don't look away from me, Merrily," he said softly. "Take a couple days to rest and recuperate from your ordeal. Let Ruth do what she does, and I'll take care of the rest. After that, if you still want to leave, I won't stop you. But perhaps you'll find you like it here."
Finally, she nodded slightly. Alex was so relieved, he wanted to kiss her. Instead, he settled for memorizing her face. But when her lips parted, he found himself falling forward, until their lips were pressed together.
The shot of lust was immediate and hard. Alex had to fight a groan, but he heard Merrily's little whimper. Her hands clutched at the front of his shirt, bunching the expensive material. He had no idea if this was her way of holding him to her or if she simply held on for dear life, but Alex had -- had -- to kiss her.
Somehow, he found the presence of mind to separate from her long enough to look into her eyes, to see if she was afraid or, worse, disgusted with him. He halfway expected her to slap him. Lord knew he deserved it. He was offering her a safe haven. A job. A means to save herself and her daughter and get the hell out of Dodge if she wanted. Would she think he expected the use of her body in payment?
What he saw in her eyes was such a mixture of everything it made him growl. She was definitely interested in him as a man, but she was also terrified to turn him down. "Just one more kiss, Merrily," he whispered against her lips. "I'm not taking my payment from your body, but I have to kiss you again."
"OK," she managed. Alex could feel the fine tremors going through her body. Her hands still clutched at his shirt and he was thankful. At least she wasn't rejecting him outright. He knew she'd have no idea what to make of this. Hell, he didn't either. But the need… the hunger. All for her.
Never in his life had Alex experienced such a visceral reaction to a woman. It was all he could do to keep his kiss gentle. Especially when her hands adjusted her grip. She gripped the muscles of his chest, her fingers flexing and relaxing, kneading like a little kitten. Her return kiss was tentative, but she seemed to want to explore as much as he did.
When she whimpered beneath him again, he backed her up against the wall, one hand going behind her head, the other circled her back, holding her to him tightly, giving her no way to get away from him. He deepened the kiss, slanting his mouth over hers with a little more force, letting her know how much he simply wanted to take her and damn the consequences.
Alex knew this was wrong. Knew he was taking advantage of a woman much younger and so much more inexperienced than he was in more ways than one. She would likely expect things from him after this. Truth be told, he'd give her anything she wanted if he knew he could have the free use of her body.
That thought brought back his sanity when nothing else could. Would she expect money? Luxuries? Would she expect them to be in a "relationship" now? Why did that thought not give him the anxiety he'd always felt when a woman got clingy?
Ending the kiss slowly, Alex pulled back, needing to see every expression on her face. Her eyes were still closed, a look of complete and utter bliss on her face. Her cheeks were the lightest pink, her lips kiss-swollen, giving her an adorable pouty look. When her eyes fluttered open, they sparkled like deep, clear emeralds. She didn't look like a woman who had landed the "big fish," she looked like a woman who'd completely lost herself in the moment and enjoyed it for the intensity of the pleasure she received.
As he watched, reality slowly began to take hold of her. Instead of elation or any number of other emotions, he saw shame. Humiliation.