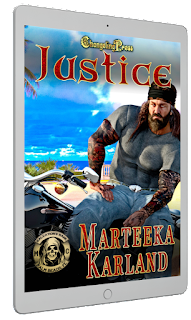 “I’m surprised your lawyer isn’t present for this.”

“Well, someone took up the cause. Must have a good mind, too, to get that conviction overturned so quickly”

“Quick? If you call eight years quick, you’re older than you look.”

Surprisingly, that got a sharp bark of laughter from the judge. “Considering the family involved and the fact that Florida doesn’t like looking bad in legal matters, yeah. I’d call it quick. Are you telling me you’ve never met the lawyer who filed this on your behalf?”

“I’m sayin’ I didn’t know anything was being done on my behalf in the first Goddamned place.” Justice glanced at the bailiff. Sure enough, the man winced at his language. There was no way to stop the smirk Justice threw the other man’s way. He loved goading easy marks.

The judge had opened his mouth to say something when there was a commotion outside the chamber doors just before they burst open. A short, busty woman in four-inch heels stumbled through the door. She carried a briefcase with several pieces of paper sticking out, and her hair, which probably was supposed to be in a tight bun, was sticking out in several directions in jet-black, kinky curls. No. Curls wasn’t exactly right. They wanted to be curls, but they were mostly a frizzy mess. The glasses she wore were too big for her elfin face, her eyes the color of perfect sapphires. She wore a white blouse tucked into a black skirt. The blouse hung from her arms but stretched tightly across her breasts, and her skirt gapped at the waist, but looked like she was barely able to squeeze that generous ass into it. She carried a suit jacket draped over one arm as she caught the door with the other hand to keep from falling. All in all, she was a hot mess.

“Judge Harlan!” She stumbled once more, then righted herself and hurried to the front of the courtroom… to stand beside Justice? What the fuck?

Judge Harlan gave a long-suffering but amused sigh. “Mae Stephens. I should have known you were behind this.”

The girl, Mae, hesitated, putting her stuff on the desk in front of her. “Behind what? Did I do something wrong?”

The bailiff snorted. Which kind of pissed Justice off. This Mae couldn’t have been much into her twenties and looked as innocent as they came. Right now, she looked confused and unsure of herself.

“No, my dear,” Judge Harlan replied immediately. It was the only thing that saved the man from a tongue lashing. Making this girl feel bad had seriously jeopardized his position in Justice’s list of favorite people. Short list that it was. “Nothing wrong. It’s just that you always seem to show up in the middle of unusual cases. Always the one working to free someone from prison.”

“Well, innocent people shouldn’t be locked up. And Mr. Creed was innocent.”

“Not sure about that, Miss Stephens. But you did uncover some pretty massive problems within the DA’s office. A word of advice, though, and I mean this in the most sincere way possible. You’re a good girl. I don’t want to see you hurt.” He glanced at Justice, and Justice got the impression he wanted him to pay attention to what he had to say as much as he wanted Mae to. “You’ve made some powerful people look bad. Cost one of them his livelihood and another one his freedom. Lay low for a while. Don’t work on any more Innocence Projects for a while, or whatever it is you do. This one could very well cost you more than you’re willing to pay.”

Yeah. Justice got the message loud and clear.

“If that’s true,” Mae said, regaining her confidence, “it’s no more than they deserve. They broke the law just as much as they said Mr. Creed did. And by giving him a life sentence, they took his life away just as much as they said he took the life of someone else. At least he allegedly did it for the right reasons. Vigilantism isn’t a good thing, but sometimes it’s all the little people have.”

Judge Harlan sighed. “You’re too much of an idealist for your own good, Mae. Just… be careful. I like you very much and don’t want to have to preside over someone accused of hurting you.”

Mae shook her head. “You won’t, sir. You’re too good a judge not to recuse yourself if it comes to that.”

“Are you for fuckin’ real?” Justice couldn’t hold back any longer.