Are you ready for Black Reign MC?

Introducing RYCKS. If you're a reader of the Bones MC universe, then you know Rycks. This first book in Black Reign MC will keep you on the edge of your seat. But don't take my word for it. See what ARC readers are saying!

--Rycks is an absolute must read! Their journey together is just loaded with surprises and chaos... --Gpowe BookBub

--I couldn't put it down until I finished. --Dee Ann BookBub

--Rycks is the embodiment of an Alpha man and it makes the story so much better.--Tasha S BookBub

--I'm excited to see where the Black Reign series takes us. --omgkandykane BookBub 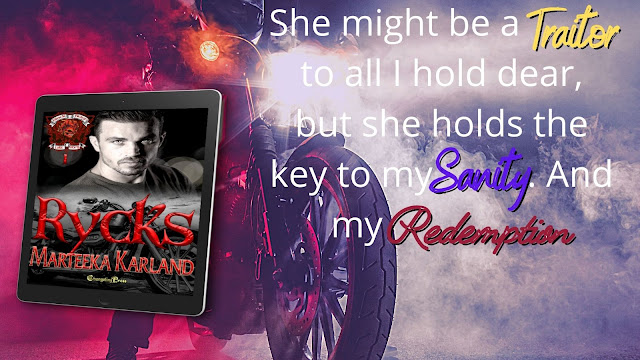 “Look. I can’t stay here past tonight. But if I go back with something that looks important, you could control the information I’m giving them.” Was it my imagination or did he look disappointed?

“I don’t like it. I’d have to discuss it with Thorn, and he’d have to decide what you tell them, but it’s not something I want to risk.”

“It’s the only option I have.”

“Why do you have to go back, Lyric. You’re here with me now. You’re safe.”

“All you need to know is that I have to go back. I want to go back.” If the look on his face was any indication, I’d just thoroughly pissed Rycks off.

“You’re staying. End of discussion. You want to go back, you tell me why.”

Rycks sighed and reached for me to pull me onto his lap, straddling his hips. He stood up and turned to sit in the same chair he’d plucked me out of. Those strong hands held me still. Like I’d dare move.

“Are you telling me you want to go back to that lot? They’ll use you until there’s nothing left. I’m surprised they haven’t already. You’ll die in that place if you go back. You have to know that.”

“No. I don’t know that. Dangling information from someone high in rank at Black Reign would keep them off of me. Plus, they need me working at my job in the city. It’s the only way they’re able to get their information.”

I tried to ignore how good it felt to be in his arms again. Rycks was my first lover. He’d made me feel special despite his refusal to keep me. Even that had been because he’d thought any danger I faced wasn’t anything like what I’d face with him. I had no idea if he’d been right, but I knew where I was now was as deadly dangerous.

“You’re a damned fool,” he snapped. Then he did something unexpected. He slid his hand into the hair at the back of my head and pulled me to him. “Girl, I’m surprised they let you leave at all. Surprised they haven’t already made you a whore in the most violent way possible. It would be Rat Man who’d start with you. You know that, right?”

I shivered. Rat Man. Even saying his name gave me the creeps. The man knew no depravity he didn’t indulge in. If there was a repugnant sex act out there, chances are he’d done it.

“Yes. I can see you do know. I can also see you’re afraid.” He sighed, loosening his grip on my hair, but not letting me pull away from him. “I suppose that’s something.” With a sigh, he pulled me to him until my head rested on his shoulder. “You’re going to be a problem, I can see. Not sure the word brat even covers you.”

“Why would you call me a brat?” Maybe I was, but it was only because, for some reason, I felt safe to let that side of myself out when I was with him. Sure, he tried to come across gruff and dangerous - -and I was sure he was under the right circumstances -- but I knew in my heart he wasn’t like anyone at Kiss of Death. He was a protector first. A killer only when someone he was responsible for was threatened.

“Because you’re testing me when you should be following orders.”

“Never been much good at following orders.”

“I can see that. Also,” he said, taking a deep breath, “you’ve got to tell me why your family went missing from Ismay. And why you’re the only one of them ever to turn back up.”