So, I'm participating this week. :) My Sunday Snog from Lawman's Pleasure, available at SharaAzod.com. This isn't exactly a "snog" but it's as close as I could get with this book. A cozy romance... it is not. LOL 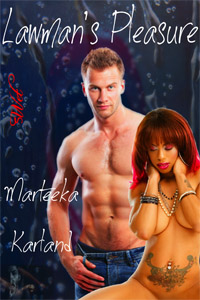 Once the door was shut and locked and Megan had Obadiah right where she wanted him, she advanced on him. It was comical to see the big man back away from her as if she were a threat.
"What's the matter? Scared of little ole me?"
"I don't think this is proper..."
"Of course it's not proper. Does that mean you're not going to do it?" She quirked an eyebrow, still moving toward him. He stopped when he reached the wall of her living room. Smiling, Megan slid her fingers up the front of his chest again, fingering the buttons, itching to undo them and see that powerful body of his.
"Do you have any idea what you're doing?" Damned if his husky whisper didn't send an electric thrill straight to her cunt. Megan wanted to jump him right there. Wrap her legs around him and just take him.
"Well, I've had practice. I certainly hope I have it figured out by now."
With that, Obadiah pulled Megan to him, whirling her around so she slammed into the wall with almost jarring force. "Don't taunt me, woman," he growled. "I'm not in the mood. You're already in enough trouble."
And just like that, Obadiah Matlock was the Alpha male everyone knew him to be. Yes, Obadiah was not one to be fucked with. Though Megan totally intended to fuck him. Just not in the same way. She smiled at her own naughty thoughts.
"Well, I guess you'll just have to spank me then."
at 17:27