Sunday Snog! The Third Wednesday by Shara and Marteeka

Yeah, yeah. I'm late. I blame Wendi for it. She was supposed to remind me. *snicker* 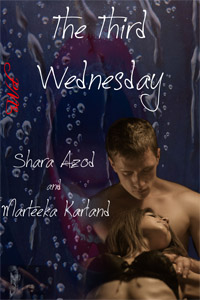 Once caught in the trap of his sensual gaze, Tonisha found there was no looking away this time. He wanted her to keep looking at him, and she was powerless to deny him. Slowly, ever so slowly, he bent his head to her breast. Warm breath fanned the rigid peak as he looked at her. He wasn't asking permission, just giving her time to stop him. Because Tonisha knew unless she actually said the words, he was taking the massage to the next level. She'd be damned if she even tried to stop him. It would be like refusing the most critical part of her therapy. And it was therapy. Her monthly ritual was as much about putting herself in someone else’s keeping as it was to relax and enjoy herself.
Fascinated, Tonisha watched as her nipple disappeared between his lips. A hiss escaped before she could stop it, her whole body clenching in desperate need.
"Eduardo..." Although she had spoken, she had no idea what she was about to say. Stop? Yeah, right. Not so much. It felt too good. It had been way too long.
"Shhh," he commanded. "Just relax. Let me channel your tension and remove it with pleasure."
Who was she to argue?
He took her nipples with long, slow, flat licks of his tongue. Both breasts received equal attention. There was no way she could stop the way her fingers threaded through those silky, black locks of his, even if he'd told her to. It was almost like a naughty dream, an incredible fantasy she couldn't control. Eduardo lavished attention on her breasts until she not only squirmed, but moaned and bucked her hips helplessly at him.
That was when he kissed his way down her body to her navel, delving into the little indenture with his tongue. All the while, he never broke eye contact with her. The intense scrutiny was a little unnerving. It was as if he watched her for the slightest reaction, the minutest change in expression. Tonisha had had many lovers, but none of them had ever paid this much attention to her. This truly was all about her pleasure.