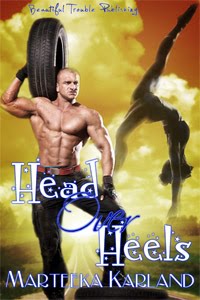 Head Over Heels
by Marteeka Karland

“Drop the towel and come here,” he said, reaching out a hand to her.

She actually blushed, her gaze shifting away from his.

“Please, Natalia.” His voice was husky, betraying his need.

Natalia hesitated, but did as he asked. Immediately, his breath caught. Her breasts were small, barely rounded mounds with muscle layered underneath them, but through each nipple she wore a small, gold hoop. He’d been right about that, but the suspicion and the realization had very different impacts. If the first had made him hard, the latter brought him to his knees with needing her.

It took a supreme effort to drag his gaze away form her nipples, but he did manage. She didn’t have a naval piercing—which surprised him, given she obviously wasn’t opposed to the idea.

“Why not pierce the sexy little belly as well?”

She flushed and looked down and away from him. “My mother would know.”

“Ah, so it was a form of rebellion. I wonder what other treasures you have hidden?” Zechariahs managed to sound steady and calm, but it was seriously straining him. Especially as he continued his inspection of her perfect body.

Her mound was bare, devoid of any body hair—the cut of her leotard made that expected—but then he caught the glimmer of something...

He did drop to his knees then, needing with everything in him to know what she hid between her legs. She stiffened when he urged her legs apart, but obeyed his silent command.

“Sweet Mother above,” he breathed.

That was all he could take. Without another word, without any warning whatsoever, Zechariahs latched onto the little gold ring piercing her clit and swirled his tongue around it and her.

Natalia’s knees gave way and Zechariahs had to wrap his arms around her thighs and hold her just underneath her buttocks in order to catch her. He didn’t stop his teasing and tugging on that damned ring though. She deserved it for having it to begin with. No red-blooded man could resist the temptation she offered.

When she squealed and pushed at him, gasping and shuddering, he stopped just long enough to look up at her.

He stood then, scooping her up to lay her gently on the bed. Whipping his t-shirt over his head, Zechariahs followed her down. She scooted back and away from him a little, but almost immediately stilled, allowing him to lie beside her, his body curved around hers as if he could take her into the shelter of his body and keep her there forever.

Lazily—when he was really as tightly coiled as a spring—Zechariahs circled one nipple with his tongue, catching the ring with the tip and tugging gently. He was rewarded with another squeal from Natalia, but this time, she circled his head with her arms, holding him to her.

Taking that as an encouraging sign, Zechariahs moved over her more, putting his jeans-clad leg between her thighs and rubbing gently. He moved to the other breast, lavishing it with the same attention as he had the first. Natalia’s nipples peaked deliciously when he laved them with his tongue. The way she made that little sound when he tugged the rings ever so slightly made Zechariahs’ cock swell and throb.

Muscles played and bunched beneath the skin of her belly, revealing a six-pack to rival his own. Until that moment, he’d always thought muscled women weren’t feminine. Now, he realized how sexy muscle could be on a woman. Natalia was slight of build, but she was strong. She was built to take his much larger frame. Her sculpted body, though small, was made specifically for him. He could play with her all day and night and she could take whatever he needed to give her, and give him just as much back.