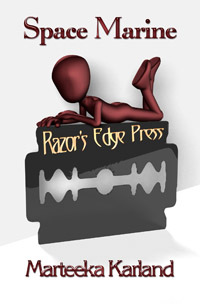 Not only does Andromeda go where no man has gone before, she resides there. Boredom is null and void in her line of work -- the entertainment of Space Marines who seem more than a little hungry for a warm and willing female form. Yet, something has been... missing. That something might have just strolled through the doors of her station...

If there was one thing Andromeda loved, it was a big cyborg space marine. They always had those delicious muscles that made her mouth water. Every one she’d ever met had never refused the optional “equipment” that went with the cybernetics. It always made for one delicious ride indeed.

The station orbiting Earth had more traffic than any other station in the sector. Which meant more space-weary customers starving for a woman than she knew what to do with. But Andromeda $wanted a space marine. Besides being starved for a female body, they paid well. They always demanded much, but the perks far outweighed the demands.

The deep, gruff voice brought her out of her musings. Not that she minded. Looming over her was the biggest, meanest looking space marine she’d ever seen, complete with outer armor and a big gun at each hip.

She rolled her eyes to cover her irritation, crossing her legs and propping her chin on her hand. “Sorry, big guy. We’re busy tonight. It’s me or nothing.”

He looked frustrated, but a few seconds later, he swiped his hand in front of the reader. The scanner deducted the appropriate amount for an hour of her time. Andromeda smiled. She could definitely spend more than an hour exploring, but some was better than none.

“Weapons in the locker.” She pointed to a large storage locker where he could store his suit and other weapons. The man was already working to get himself out of the bulky body armor, eyeing her up and down as he went. As she’d hoped, the enhancement between his legs was a huge bulge contained in the tight under armor he wore underneath his outer suit. “Well, all but that one.” She nodded to his crotch. “We’ll definitely need that.”
at 00:00