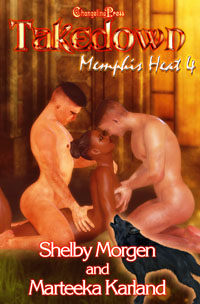 by Marteeka Karland and Shelby Morgen

COMING NEXT WEEK!!
NO PUN INTENDED...

Memphis, Tennessee. Two packs fight for the heart of the city -- one old world, one new. The Russian mob and the MPD stand at odds, the city of Memphis caught in their crossfire.

Their growing pack at their backs, the new Alphas plan to leave their enemies in the dust. But it's their friends they should be watching out for.

When the final takedown comes, there will only be one Alpha standing.

Then Callahan rammed in again, deep and hard, pulling Remmy back toward him as if he were fucking them both. Amanda let go of one breast, reaching between them to finger her clit, pounding herself back hard against Remmy’s balls trapped between them. Remmy almost had a moment to feel a bit sorry for her knees, spread as they were across two lovers’ thighs, but she didn’t seem too worried. They pulled back again, almost shoving away from one another, then flattened her between them.

Remmy wasn’t sure that was possible -- not without something getting permanently marked -- but it was a challenge, and he was damn well going to try. In and out, farther with each stroke, pulling back till only the reach of Callahan’s grip on his wrist kept him from pulling free completely, then burying himself until he felt her ass on his balls as they slapped with each thrust forward. He drove in again and again. His cock was so hard he was ready to explode, holding back more pressure than he’d ever felt before. He’d had sex before, but only with one human at a time. The power, the strength the shift had gifted his body with… “So hot,” he moaned. “So fucking tight. Jesus, I’m going to catch fire.”

This time he didn’t have to ask what she meant. Instinct took over, and there wasn’t any way he could prevent marking her after this encounter. Callahan smashed them all close again, and Remmy fastened his teeth over the meat at the juncture of Amanda’s neck and shoulder in the way of a mating wolf. Callahan did the same on the other side.

Amanda screamed again, a high, piercing cry, and he felt the walls of her pussy contracting around Callahan’s dick, pulling him tighter as well, trapping his cock in a vise like wave of a fiery explosion. Callahan’s cock, so close they almost shared the same space, pumped deep and strong, drenching the wall they shared with liquid fire. At that Remmy lost it, crying out as his balls emptyed shot after shot of creamy seed into Amanda’s ass.

“The pup’s still hard,” Amanda told Callahan with a smile.

“So am I,” Callahan observed with a little thrust. “But if we try that again right now, my arms may fall out of their sockets.”

Amanda laughed at that. “What’s the matter, old man? The young pup wear you out?”

“Oh, good.” Remmy laughed. “’Cause I thought you were trying to kill me. Not that I can think of a better way to die…” He swirled his hips, teasing Amanda’s ass in slow, sensual circles. “I’m still new to this whole werewolf thing. Can we come again?”

“Depends,” Callahan replied with a grin.

“On whether the bitch decides to let us live that long.”