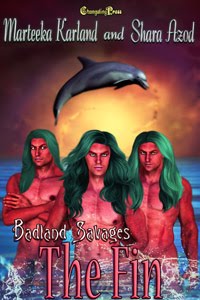 
by Marteeka Karland and Shara Azod
In the Badlands, women are rare, no matter the species. For the Fin, there are no females except those they can seduce... or steal.

The time had come for Que, King of the Fin, Raf, Right Hand of the King, and Kor, Master of the Guard, to find a queen. Not from the corrupt lands ruled by humans striving for a second chance to ruin the Earth for once and for all. Their queen has to be pure of heart and as courageous as any warrior. Like the Rebels, the humans who reject the lies of their own kind to carve out a new life in lands rife with danger.

More dangers than death lurk under the sea in the Badlands. And learning to swim won't help you escape.

This was $so not a good idea. The second his tongue found its way inside her mouth, Aereal lost all sanity. She’d been kissed before, but never like this. This man meant to claim her, to steal her mind, body, and soul. Warm, rough hands trailed over her skin in a gentle caress while he kissed her, creating even more sensations she didn’t know how to process. All at once, her body was wound tight, like a fishing line with a monster fish on the end of it. She wanted to fight just as hard, knowing her very life was at stake, but she couldn’t find the strength. She wanted $this. She wanted the pleasure he was promising with his body.
As she tried to get a grip on her emotions, her body was stripped of her remaining underwear. Kor and Raf flanked her, hands and lips roaming every hollow and shadow of her body. One nipped gently at the underside of her bottom while the other licked a blazing trail from thigh to hip. Que framed her face with his hands, cupping her head as he angled her where he wanted.
Que towered over her, dwarfing her own sturdy frame with his much larger one. Heavy muscles all over his body let her know he was more than a coddled king. This man was a warrior. Strong. As were his brothers in arms. Raf might have been an advisor, but he was every bit as powerful as the Master of the Guard, Kor. None of them were men to be trifled with. And they were playing her body like a finely tuned instrument.
They backed her up to the bed, and Aereal found herself climbing on top of the massive structure. She expected them to follow her and pushed herself back, but Que hooked his arms around her thighs and pulled her to the edge. The other two stood to the side, stroking themselves, eyes fixed on her.
That was when she realized what Que intended. Aereal tried to close her legs, but he held her firmly, a deep, rumbling growl coming from his throat. Que pushed her thighs wide, opening her fully to his hungry gaze. The man actually licked his lips, and sweat broke out over Aereal’s body. She was no virgin, but what this man was considering she’d never even conceived.
Again, she tried to force her thighs closed and when he still held her, she covered her pussy with her hands. Or tried to. Kor and Raf caught her wrists in firm but gentle hands and pulled them away. Aereal was suddenly trembling uncontrollably.
“I can’t...”
“Yes, you can,” Raf murmured next to her ear. “You can do this because you are the woman who will be our queen.” He nipped her earlobe before taking it between his lips and sucking gently. “Besides, he will bring you much pleasure.”
Aereal was breathing too fast. She knew she was hyperventilating but couldn’t seem to get herself under control. She hadn’t been this nervous her first time. That hadn’t been a life-changing event. This would be.
Que didn’t seem to be able to pull his gaze away from her cunt. Slowly, with great purpose, he lowered his head to her and made a long swipe with the flat of his tongue from her opening to her clit[KK1] . Aereal screamed, arching off the bed but trying instinctively to pull away from him. Que held her down with an arm across her hips, pinning her in place as he lowered his head a second time.
“Don’t fight him, little pearl. Let him pleasure you,” Kor soothed. He smoothed her hair back before settling his lips over hers, kissing her gently but thoroughly. The combination of Kor kissing her, Raf blowing gently in her ear, and Que doing decidedly wicked things to her pussy was almost too much for Aereal. Sure, she’d had sex before, but sex didn’t cover this. This was more. It was mind-numbing pleasure unlike she’d ever imagined, and they hadn’t even gotten started yet.
“Too much,” she gasped out even as Que closed his mouth over her tingling and throbbing pussy. She arched off the bed again, this time struggling in earnest. “This isn’t going to work... ah!”
Que flicked her clit, fluttering the sensitive nub with his tongue. Her whole lower body tingled and coiled tightly. She felt like she might explode, and she wasn’t entirely sure it was a bad thing. She did know she was in over her head.
“Just relax.” Kor ran his hand over her head again, wrapping the strands of her hair through his fingers. “Give yourself to us.”
She wanted to protest, to insist she couldn’t do this, but her body silenced her mouth. Her senses overrode her better judgment. She knew she was damned, but she couldn’t find it in her to care much. With one shuddering sigh, she closed her eyes and just... let go.