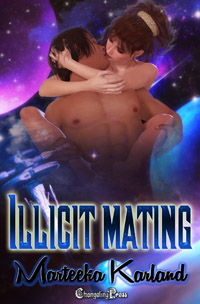 “We need to get one thing perfectly clear,” he continued, breathing just as hard as she was. “When I tell you to do something, there is usually a reason for it. Those men were hired mercenaries whose goal is to take over Lunar Colony 1 for whomever paid them.” He didn’t move off her, but kept her pinned on the bed. When she’d fallen, her legs had spread, and he was now wedged between them. “Kil and I are here not only to help in the construction of LC1, but to protect it from these mercs. We have no idea who is funding them, but we know they are well paid. As such, they wouldn’t hesitate to kill anyone who tries to stop them. That includes a foolish woman with no business fighting such men.”

Worr shifted his weight, flipping Gabrielle over before covering her body with his own once more. The glint of war was in his eyes, a fierce battle lust she knew would serve him well in a fight. Worr might seem calm and controlled, but she knew now he was a dangerous man. Unexpectedly, her belly tightened and her hips arched against his leg where it was wedged between hers. She’d almost been killed. Had probably killed the man she’d burned. Adrenaline still coursed through her, fed first by the violence in the corridor then by Worr’s reaction. All that energy needed to be let out. Now. If not, she was sure she’d lose her sanity.

Before she could stop to consider the consequences of what she was doing, Gabrielle grabbed a fistful of Worr’s hair and brought his mouth to hers. He didn’t resist, rather meeting her with a kiss of his own. His tongue plunged into her mouth, conquering, claiming, probably tasting the fear and excitement inside her just as she tasted it on him.
Worr lifted her further onto the bed, settling his body squarely between her spread thighs. Both were still fully clothed, but the instinct to mate seemed overpowering. All Gabrielle could think about was turning all the fear and terror inside her into pleasure in this man’s arms.

She kissed him back as greedily as he kissed her. Both vied for dominance, but Gabrielle knew there was no way this man would submit to her. Instead, she found she wanted to be at his mercy. When he was kissing her like this, touching her roughly through her suit as if he had the right to her, she found she wanted to give herself to him, to do whatever he needed in order to satisfy them both.

With impatient fingers, Worr unzipped her pressure suit and moved her clothing until he found the skin of her stomach. With a groan, he moved his battle-roughened hand up her belly to squeeze her breast through the material of her bra. He was rough with her, his touch not at all gentle, but he didn’t hurt her. There would probably be slight bruising later, but the sting only amplified her need. She arched into his touch, whimpering her desire for him, her legs locking around his hips as she struggled to bring herself the friction she needed.

“You will never, ever do that again, Gabrielle. Do you understand me?” He didn’t let her answer, but found her mouth again, kissing her so she couldn’t think straight. “You’re my woman. Mine to protect. You will never place yourself in that kind of danger again.” This time, he did pull back, giving her a little shake for emphasis. “Do you understand me?”
Gabrielle took several deep breaths, trying to bring some semblance of understanding back to her garbled mind. There was a reason she’d disobeyed him. She just had to make him understand.

“I only did it to protect you,” she managed. She didn’t want to talk. She wanted to fuck! She needed this physical manifestation of their attraction to each other. She needed the release he promised with those drugging kisses.

Shock crossed his features, followed quickly by anger, then amusement. “You? Protect me?” He rolled off her to prop himself up on one arm. “You couldn’t protect yourself, much less a warrior of my status. All you need to do is what I tell you to. That and warm my bed at night. Follow those simple guidelines, and we’ll get along just fine.”

Oh $no he didn’t! The infuriating grin on his face was her undoing. Where she’d found it charming and devastating before, now she found it arrogant and... $male!

She got to her feet, sliding off the bed as smoothly as she could, ignoring him completely. Shrugging out of her suit, she found he’d removed his body armor and come up behind her, keeping his distance, but obviously expecting them to pick up where they’d left off if the bulge between his legs was any indication.

“Just so we’re clear,” Gabrielle said softly, “what exactly is it I’m supposed to do again?”
“What I tell you and warm my bed at night.” He replied without hesitation. Obviously, she didn’t look like any threat to him.

“That’s what I thought you said.”

Worr took a step toward her. At the same time, Gabrielle swung an open-handed slap at his face, connecting with a satisfying $smack.