Available Now! A Hero to Rescue Me by Marteeka Karland

Check out Marteeka's solo addition to the men of Hero's Crossing! 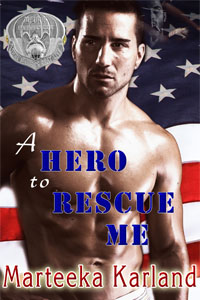 When Technical Sergeant Chase Carver loses his best friend and brother in arms he never imagines a greater gain could be waiting just around the corner. At least not until he gets a Christmas card from an unexpected source--the bubbly little daughter of the man his best friend gave his life to protect.

Chase's exchanges with Abigail go on far past Christmas, and lift the seemingly never-ending heaviness that has weighted his heart. It's no exaggeration to say the cards, letters, and care packages saved his life. Then he finds out why his care packages are so well put together.

Abigail's Aunt, Melanie, is staggeringly beautiful and in a bit of a mess, herself. In fact, she seems to be in dire need of a hero. Fortunately, Chase is more than ready to take on the job.

“Melanie?” Chase’s husky whisper washed over her like warm honey. God, she wanted this man. Not just for a night. She wanted the fairytale. Wanted forever. But she’d barely known him a week. It was totally too much to ask.

“Yeah,” she said, rising and crossing to him. “I was just about to get some water. Maybe you could get me some of your mother’s leftover hot chocolate instead?”

His arms slipped around her, pulling her against the warmth of his body. He was shirtless, and the thin sleep pants did very little to hide his growing arousal. A thrill shot through her at the thought. Was it her, or would any woman arouse him? She hoped it was her. He certainly made her mind wander to places it had no business going.

“With pleasure,” he rasped out, pulling her with him into the hallway. Through the den and one kitchen to the second kitchen at the very front of the house, away from the master bedroom and his parents. The implications weren’t lost on Melanie. Was it on purpose?

Once a cup of chocolate was in the microwave, Chase backed her up against the counter, caging her in. One hand slid up her hip to her waist, while the other cupped her face. His hands were so big—his body as well. Muscles clenched and flexed when her hands slid up his chest seemingly on their own. Melanie certainly didn’t remember making a conscious decision to cop a feel.

His mouth at her ear, he said, “I was thinking, I believe everyone had a grand time today.”

“We certainly did. Thank you for the wonderful memory. Neither of us will ever forget it, Chase.” It was true. The day had been so special to her that even the awful way Dan had showed up and done so much damage to her car hadn’t completely ruined it for her.

“Good. But, you should know, I’m a mercenary at heart. I expect payment from you.”

Had she not felt him smiling at her cheek, Melanie might have slapped the turd-head, but something made her say, “Oh? What’s my tab, then?”

“A kiss.” Was his voice deeper? More husky sounding? His cock was certainly throbbing against her where he seemed helpless to hold himself away from her. Not that she minded. It was thrilling to know she could do this to a man like him.

“Hmmm...” She tried to sound like she was thinking it over, but knew she’d give it up. A kiss or anything else he wanted. “You drive a hard bargain. Had I known the price was so steep, I might have declined your invitation.”

His rumbling chuckle was the last thing she remembered before he turned her face up to him, threading his fingers through her hair to hold her still for his kiss.