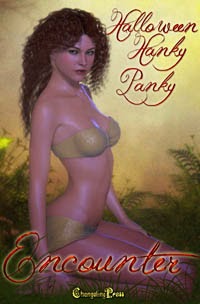 Halloween should have been Belladona’s favorite holiday, but truth was,
she was a witch who was scared of, well, scary things. Even a child’s costume, if
done right, could make her squeal like a girl. The other witches in her coven got a
kick out of it, jumping out of dark corners to startle her. If she shrieked, all the
better.

So when Desmond, a warlock from the protector coven seemed to
materialize from the shadows of the trees outside the manor, Belladona did, in
fact, squeal like a girl.

Laughing when she lashed out, swinging her arms, pounding his chest in
her fury and embarrassment, Desmond simply snaked his arms around her.
“You know, you could go through one of those twelve-step programs.”

“Aren’t you supposed to protect my kind? that’s why they call your coven
a --” she made air quotes, “Protector coven.”

“I’m here, aren’t I? Soothing your fears with my arms wrapped around
you?”

Why did he always manage to make her feel so breathless and flustered?
She knew he didn’t really want her. Desmond was the coven bad boy. Every
witch he’d ever met wanted him. Some he took others he didn’t, but no one had
ever managed to hold his attention for longer than it took for him to bed her.

Until this very night.

She shrugged away from him, putting distance between them. Desmond
might be everything she hated in men, but he was still sexy as hell. The last thing
she wanted to do was to fall for his charms and then into his bed. “I can take care
of myself.” He snorted, grinning as he crossed his bulging arms over a massive chest.

“I can see that. You jump at your own shadow, little Bell.” Again, he moved
toward her, a predator stalking his prey. “You know I can protect you.”

“Yeah. You protect many witches and they seem to enjoy it. Why not go
find one of them to bother. The full moon will be out soon and I’ve got spells to
work tonight.”

The infuriating man simply chuckled. “Oh, I’ve got a bit of magic to work
tonight too, though none of them involve potions.”

Now, why did the thought of that make her toes curl? Shaking herself,
Bell tried her best to rally. “You’ve had enough practice in that department,” she
rolled her eyes, trying to look like he didn’t affect her. If he knew how much she
wanted to explore the option where he worked magic on her body, he’d pounce.

“Why not find a witch who will appreciate your special… talents?”

“Are you saying you wouldn’t?”

“I’m saying I don’t want to suffer from comparison.”

In the blink of an eye, Desmond’s expression was so intense, Belladona
actually took a step back. When she retreated, he advanced until Bell was
trapped between his hard body and and equally hard tree.

“One thing you can be one hundred percent certain of is that you will
definitely not suffer from comparison.” His voice had gone low and husky,
almost a growl.

Swallowing, Bell took a breath before trying to explain herself, one last
attempt at self preservation. “I”m not as sensual as most witches,” she finally
admitted. “It’s just never been my thing, you know? I’m just not a very sexual
person.”

Mood changing as quickly as any familiar, Desmond chuckled, pressing
his body harder against hers. Lord, he smelled good! He rubbed his face against
hers, nuzzling her skin until her head fell back, giving him access to more of her.

“You let me be the judge of that, hmm?” Then he claimed her mouth. For the first time in Bell’s life, uncontrollable lust coursed through her. It

took her befuddled mind several seconds to process the need, but once she did,
she clutched at Desmond’s sides, clinging to him as if her life depended on it. In
fact, his might very well. If he tried to pull away from her, tried to tell her he was
only joking that he only meant to see how far he could push her, she’d turn him
into a toad on the spot.

Seeming to like her reaction, Desmond grunted, a low rumble, all
masculine satisfaction as he found the hem of her shirt and slid his hand
smoothly underneath to reach the underside of her breast.

Bell wasn’t waiting for a more profound invitation. With shaking hands,
she found the waistband of his pants, tugging open his jeans with impatient
fingers. She was rewarded with his sharp intake of breath when her palm
cupped his shaft, circling it, stroking with a tentative touch.

“Ah, yes, Bell,” he rasped in her ear, nuzzling her face once more now that
he no longer kissed her. “I see nothing reserved about you. You’re definitely a
sensual creature.”

“I’m really not,” she managed to breathe, aching miserably for him. Had
this started only a minute ago? She felt like they’d been in the middle of heavy
foreplay for hours and she was about to snap. “But I need you inside me. Right
this second, warlock.”

Quick as a cat, Desmond spun her around. Never had Bell been more
thankful she’d worn a skirt in her life. The folds were long, swishing around her
legs with every movement, but Desmond was undeterred.

His hands slid up her thighs to hook his fingers in her panties, sliding
them down with a swift, impatient stroke only to find her thighs and hips with
his hands quickly again. He seemed to have a pressing need to touch her hips
and buttocks, kneading them with firm caresses until he finally dipped his
fingers between her thighs. “So wet,” he murmured from behind her. “Ready for me.”

He stood, pressing her upper body against the tree.
His cock pressed at her entrance, nudging, seeking, until the head slipped
past her opening. He stretched her, his sex large and filling. Bell pushed back,
arching her hips, enticing him, needing him inside her more than she’d ever
needed anything.

“Mine,” he hissed, sinking slowly into her. Bell gasped at his size, loving
every delicious inch. His words didn’t seem to register. All she could process
was the pleasure. Which was doubled when his hand slipped under her skirt
once more, to cup her sex from the front. Unerringly, his fingertip found her clit
and he stroked.

Belladona shrieked to the moon, her cries echoing in the night. As if in
answer, a wolf’s howl sounded in the distance, followed by more and more.
Desmond started a hard, driving rhythm inside her, plunging into her over and
over, his breaths ragged in her ear. With his free hand, he turned her face back to
him and found her lips in a kiss once more. His tongue snaked out to twine with
hers, his cock still surging into her with more intensity.

Finally, he began to swell inside her, his hold on her tightening. With his
own howl at the moon, Desmond surged inside Belladona one last time. Hot
seed spilled into her in powerful jets. Unexpectedly, she came again, screaming
with him, her body echoing the pleasure of his.

When the pleasure died down, Desmond held her up, still pressed tightly
against the tree. He righted her skirt, pulling his pants past his hips as best he
could without letting her go.

“Well,” she panted, still stunned at her own reaction, “I’m really not. Not
with any other man I’ve ever been with.” He turned her in his arms, scooping her up and heading to his coven with long, sure strides. “Then I see no reason for you to be with any other man but me.”

Bell was sure she’d figure out a reason why this wasn’t a good idea, but at
the moment, she was coming up empty. But she had the feeling she’d be filled
again. Sooner rather than later.