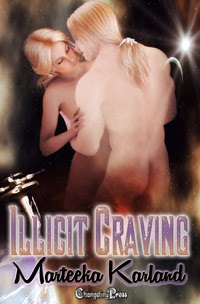 New appointed Head of Security, Worr and Kil’s sister Bacia is determined to end the violence on Lunar Colony 1. But when she's captured by one of the mercenaries, she fears she’ll be blindsided by her undeniable attraction to the handsome stranger.

Jaxon knows the fragile looking beauty isn't the colony worker she pretends to be, though he's hard pressed to say exactly who she really is. He never intended to put her in harms way, but she's in the wrong place at the wrong time and the only way to save her is to make her his prisoner. Unfortunately, the merc leader has his own plans for Bacia.

Their passion burns hot, but without trust it will burn through them both.

Remembering what Jax had said about her not being “innocent” enough, she kept a steady gaze on him, not wanting to be too bold, but needing Duval to know she didn’t bend easily. Jax swore as he pulled her into the doorway. Just before the steel panel slid shut, he did something completely unexpected. Jax pulled her against his hard, muscular frame, and fastened his mouth to hers.

When she would have protested, Jax merely swept his tongue into her mouth, kissing her as passionately as if she were his woman. Instantly, her senses were swamped by him. His kiss hard and demanding, his touch careful, gentling her when she wanted to shove him back. His arms held her firmly to him, his thumb caressed her side where his fingers gripped her, clutching her.

Why she was aware of anything other than his sinful mouth, Bacia had no idea. She’d never been kissed like this before. He demanded her response, pressing her to show him how she liked his mouth on hers. For the first time in her life, Bacia was helpless, rendered that way not by the man so masterfully dominating her but by her own senses.

Something took flight in her stomach, fluttering and struggling to free itself. The more he kissed her, the more that feeling took her over until she was trembling in his arms. And the kiss went on and on, never ending, always pleasing.

She was aware of her breasts pressed tightly against the hard muscles of his chest, her nipples aching where they rubbed against her bra and tunic. Bacia found herself gripping his arms to steady herself, the room seeming to spin, his kisses drugging her as no synthetic chemical could. Moaning and whimpering seemed to fill her ears, and it took her a moment to realize it was her voice, her cries of need.

Then there was a metallic clang as the door slid shut. Knowing they were away from prying eyes, Bacia knew she should pull free of Jax’s arms, but she didn’t seem to have the strength or the will to do so. She found she wanted the kiss to continue, and that was just unacceptable.