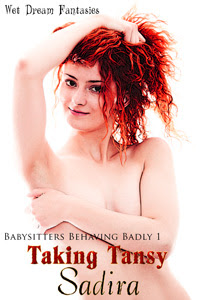 Babysitter Tansy has plans for her boss. She wants him and she's prepared to do anything to get him...

"You're wearing my robe." His voice was rich and smooth, like the expensive whisky he kept in his office. It was a voice made for sex. She could practically hear him commanding her to come all over his dick and balls.

She grazed her fingers over the lapels toward the V covering her breasts, a blatant invitation for him to follow the same path. "So I am. Do you want me to take it off?"

Grayson approached her slowly, walking around her as if inspecting his property. He was silent so long, Tansy thought he might not answer. Then he stood in front of her, looking down into her upturned face. He was so tall, she had to crane her neck to meet his gaze.

"No," he said, surprising her. Tansy's face heated unbearably. Lord, but she'd made a fool of herself! No sooner had the thought entered her head and the flush suffused her face and neck then Grayson scooped her up in those impossibly strong arms and carried her up the stairs to the big master bedroom she had often admired.

Tansy's arms circled his neck, and she nuzzled the soft skin there. His earlobe beckoned and she didn't even try to resist, taking it between her teeth and nipping. He smelled so good! Just like she’d known he would.

Somehow, she found his mouth with hers. Tansy poured all her desire for him into her kiss, sliding her tongue into his mouth a little tentatively, but boldly all the same. Grayson opened his mouth to her, but didn't do much in the way of kissing her back. His body was hard and dangerous. His muscles bunched beneath her palms, letting her know he wasn't unaffected.

He tossed her to the middle of the big California king and followed her down. "I'll remove it myself." Which he did with one hard yank, exposing her body to his hungry gaze. Tansy knew Mr. Shepherd held himself back, but she didn't know why. He wanted her. Was going to take her. That was all that mattered to her at the moment. His face was a hard mask, the little vein at his temple standing out.