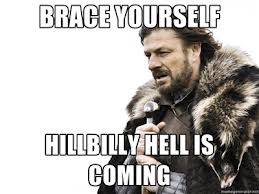 Ok, so. My husband tells me this morning...

"They're having a sale on meat at the Piggly Wiggly today. You should go by and see if they have anything that looks good."

My second mistake was in seeing the big signs that say "Old Fashioned Days!" and continuing on, thinking I'm sure it's a thing in town. The Piggly Wiggly will be practically deserted.

So, I pull into the parking lot... and into Hillbilly Hell. (that's an affectionate term.)

I should back up and say, I live in rural Kentucky. Northern folk consider Kentucky a Southern state. However, Kentucky was neutral during The War, so Southern folk don't claim us either. We are our own entity nestled in the hills and I've come to realize that we are strange probably to keep both the North and South out of our hills.

So. Piggly Wiggly. Old Fashioned Days. Me just going to get meat.

First think I see when I pull in the parking lot is an old car show. Which consist of about six cars all polished up with the hoods popped so guys can stare and point like they actually know what the hell they're looking at. (yes. some were "cracking") (if you don't know what that is... you're probably better off.)

I continue on and see a Corn Hole game going on with people standing around cheering like it's the last leg of the Kentucky Derby only to find out that the elderly gentlemen with the corn cob pipe, bib overalls, and three teeth in his head landed four corn sacks directly into the hole cut out on the wooden ramp he was tossing them toward. (hence the name. Corn. Hole.)

I get inside and they employees were in various stages of "old fashioned" dress. The women either had on poodle skirts and pink t-shirts or their pink satin jackets with "Pink Ladies" on the back. The men were a little more conservatively dressed with their lime green t-shirts with "Old Fashioned Days" on the front and "Piggly Wiggly" emblazoned on the back.

Then there was the booth where the kiddies could have their picture made with the Piggly Wiggly mascot.

That really needs no explanation.

"You could have warned me!"

"No clue what you mean."

"Ohhhh... that. Well, if I'd told you that was the reason for the sale, you wouldn't have gone."

"So you dumped me in hell?"

"Better you than me."

phone rings... my ringtone is by Rammstein. everyone is looking at me like a devil worshiper in the middle of an Elvis concert.

"While you're there, could you pick me up some Skol?"

At this point, I'm starting to have a panic attack. I got ribs, a huge mother of a pork loin, two family packs of ribeye steaks, pork chops, a family pack of chicken breasts... all for under $50. Woo hoo.

On the plus side. The barbecue ribeye sandwich from Phat Boy Joe's BBQ was pretty good... 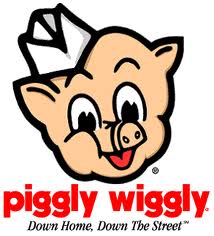