A Marine for Selah by Marteeka and Shara 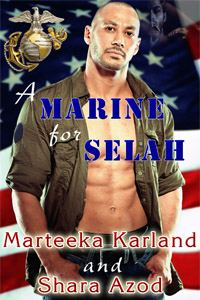 A Marine for Selah

by Marteeka Karland and Shara Azod

Selah Gooding has devoted her life to being the consummate good girl, never willing to disappoint her mother or send the tongues residing in their small Oklahoma town wagging. Her mother's diner, church meetings, and a very unsociable lifestyle have all become the things that make up Selah's day to day routine. At least until she finds herself ensnared in the magnetic pull of one extremely charming, extremely gorgeous Marine. Now Selah has to make a choice. Continue to be a consummate good girl...or admit that every now and again it’s okay to be bad. Particularly when you have the soldier of your dreams backing that decision...

It took little time to arrive at his home just off base. Once there, he helped Selah inside and urged to sit on the couch. She seemed to look everywhere but at him. Obviously she was either embarrassed or hurt. Probably both. He was a Marine, damn it--he should be able to adapt and overcome. Only dealing with things like this was so outside his realm of expertise, it wasn’t even funny. What was he supposed to do? What did he say to make it better?

When a single tear slid down her cheek and she tried to hide it by ducking her head to brush it away with the back of a finger, he was lost. Justice caught her chin gently and turned her face up to his, leaning in to kiss her. The salty tang hit him like a punch to the gut. He vowed then and there his Selah would never cry over her mother again. If he’d been the type of man who hit women, he’d have happily throttled the old biddy. All he could do now was make good and sure Selah didn’t ever have to face the bitter, over-opinionated woman ever again.

Gradually, she relaxed under his touch. Justice meant to end the kiss there--he really did--but found once he’d started there was no stopping. She tasted too damned good to stop. It felt too right to stop. With a sigh, Selah slipped her arms around his neck, whimpering against his lips. Never was there a sweeter sound. Never did anything taste so...perfect. Lips like the sweetest honey, skin so soft all he could think about was wrapping her up in satin just to compare the two sensations. Justice knew he had completely fallen. This was the one. She was the one. After living for so long, seeing so much, he had never thought to experience anything like this. But he had to slow this down. Selah wasn’t the type of woman to simply fall into bed on a whim. He had to give her a reason. A reason to fall into his bed and his life.

Frankly, he didn’t want her in his bed tonight. Hell, yeah, he wanted her. Right now there was no room in his crotch for anything but flesh and denim. Not even air was getting between the way his dick was pressed against his pants. But that was physical. He wanted so much more with Selah. What he needed was her complete trust. The only way they were going to start sleeping together was if he earned her devotion, and he just hadn’t done that yet. Selah deserved to be certain once he took her into his bed, cause she damn sure wasn’t coming out of it.

Reluctantly, Justice broke the kiss, pressing his forehead to hers. To his vast relief, she was breathing as hard as he was. That was a great start; knowing she was attracted to him. Still, he wanted more.

“I’m sorry, Selah. That was rude and ungentlemanly of me.”

“Don’t be sorry,” she breathed. “I’m not.” Despite her air of innocence, despite knowing without a doubt she was innocent, Selah had a sensual grace that made his eyes roll back in his head, his resolve to keep his intentions honorable fly out the window.

“Look,” he said, running a hand through his hair as he sat back, trying to gather his wits. “I’d want you to stay here tonight.” He raised his hands when she opened her mouth to speak. “Despite my horrible manners, I’m offering this with no expectations attached. Just a place for you to stay and feel safe. I swear to you, I won’t make a move on you.” When she raised one delicately arched eyebrow at him, he added, “Any more.